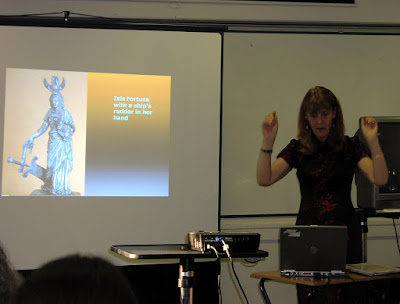 Yesterday, I had a fantastic time at PF London's Gaia-Fortuna Convention, which was held at the University of London, in Malet Street. The warm sunny weather almost tempted me to do something outdoors instead, but I'm glad I didn't.

PF London always seems to organise events that are friendly and informative. Although I knew a few people there this time, at the first one I went to - a Hallowe'en festival - I was made to feel at home even though I didn't know anybody.

This event had the theme of Earth and fortune, combined in the concept of Gaia-Fortuna. Fortuna is a Roman goddess of luck but, as Wiccan author Vivianne Crowley explained in her talk, she was been respected as Lady Luck long after Europe became Christian and today her image can be seen as Lady Justice in the figure above the Old Bailey courtrooms.

During the time of the Roman Empire, the worship of Fortuna spread far and wide and she was often linked to other goddesses - including Isis. In the photo above, Vivianne demonstrates Fortuna wearing the headdress of the Egyptian goddess Isis, as Isis-Fortuna.

Fortuna was often shown holding a Cornucopia - a horn of plenty - representing the abundance of the harvest, which is appropriate for this time of year. She is also the goddess of the wheel of fortune, the image of which is seen in Tarot cards. This brings both good luck and bad as well as the understanding that things go in cycles, which is perhaps worth remembering as we teeter on the edge of financial recession.

A less well-known symbol of Fortuna is a ship's tiller. This can be taken to represent her control of our destiny, but can also symbolise that, with foreknowledge, we can steer a careful path between the currents of free will and destiny to make our own fortune.