More on the figures in a forest 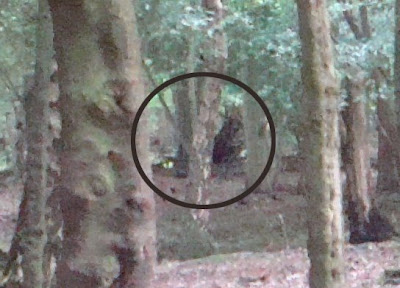 Last month, I posted on my blog a picture that a friend of mine had take in The New Forest, under the heading Figures in a forest

She was walking through the forest when, through the trees in the distance, she saw two strange figures. She told me: "I don't know what they were. They were moving from side to side. One of them looked male and was wearing a cloak and little red boots. He reminded me of images I have seen of the Green Man. To the left of him was standing what looked like a little girl wearing white. They certainly weren't human. I took out my camera and zoomed in to get a closer look and took this picture. I wouldn't have wanted to get any closer."

Yesterday, Catty left a comment on the entry, asking: "Could you post another version of the photo with them circled? I see two shapes but they aren't what you described... they look more like the Nazgûl."

So, here is a close-up of the same image with the figures circled. The girl looks a bit ghost-like to me, to her right is a shape that appears to have a face.

I am really not sure what they are, although my friend who took the picture seemed genuinely scared of what she had seen.

That's one of the nazgul I thought I saw!
Of course if I was walking through a forest and saw that I would be promptly heading the other way.

I think I'd run away from anything that looked like a nazgul too!

Nope. Still not making out anything in the photo.