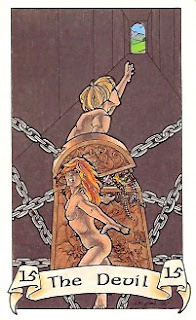 "Money is the root of all evil", or so the saying goes.

Actually, it is a misquotation from The King James Bible. The real phrase is: "For the love of money is the root of all evil." (1 Timothy 6:10).

The Devil card in my Robin Wood Tarot Deck

, instead of showing some horned-and-hairy beast as in many decks, shows two people trapped by their own desire. They are unable to see that the loot they are struggling so hard to get is only binding them in misery. All they have to do to be free is to let go. The instruction book with the deck describes the card as: "Greed, the monkey trap".

It seems to me a card that sums up the world's current economic problems. Greed got us into trouble and unless we can stop being greedy we are going to have difficulty getting out of it again.

Of course, money is - as another popular saying goes - a necessary evil. You need to pay the rent and to buy food and clothes. You need money for little luxuries too - life wouldn't be much fun without the odd evening out or treat.

The problem can come when you start to get money, and other material treasures, out of proportion. There may well be tough times ahead. Money may be tight for the average person. But we will survive. A time of financial difficulty can even be an opportunity to let go of things that don't matter and find greater happiness as a result.

Once, quite out of the blue, I was landed with a bill for £10,000. The managing agency of the housing estate I lived in had decided to embark on some major works and was expecting the residents to cough up the cash. Thanks to the wording of the contracts we had signed, there was no way out of it.

At first I was devastated. I simply didn't have £10,000. Then an article I read in a magazine helped me. It was written by someone who had been in a similar situation by racking up massive credit card debts and then losing their job. To pay off the debts they went through every aspect of their life, cutting out the things that weren't important to them.

I did the same. I gave up pretty much anything that cost money and wasn't either essential or something I really wanted. I went out less and I worked more. I sold a load of clutter I no longer needed on eBay and Amazon. I made do with clothes I already had rather than buy new ones. I used up all those little samples of shampoo that clog the bathroom before buying a new (economy-price) bottle. I even sold my beloved VW campervan. After two years, I had paid off the debt. I also had a much less cluttered flat and I had learnt to be more discerning about what I really wanted in life.

It wasn't fun, but it was a valuable lesson in mastering The Devil Money rather than being its slave.

Great post! I love your blog and looking forward to reading more!

I'm trying to do some of the same--cleaning out and cutting back. It ain't easy!

I agree it is difficult to declutter and cut back. One of the things I found toughest was giving up the cappuccino I had been in the habit of buying on the way to work each day. It was seriously overpriced, but lovely.

I understand about giving up the cappuccino! I had a similar habit and one day just realized it was costing way too much. After a couple of days, I didn't even think about it, however. And I like having the extra cash.