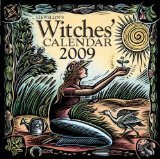 I was delighted to get my Llewellyn's 2009 Witches' Calendar in the post yesterday.

As a bad witch - meaning a witch who likes magic to be as easy as possible - I rely on my calendar to tell me when it’s a full moon or the dates of pagan festivals.

It does seem a little bit silly to be thinking about next year before Samhain is even over, but a few years ago I left it too late to order one and they had all sold out, so now I get mine early.

I like Llewellyn's Witches' Calendar because as well as showing dates, lunar cycles and astrological data it also has articles about the pagan significance of each month and full features on a variety of magical subjects at the back. A lazy witch like me enjoys being able to see at a glance what I'm supposed to be celebrating and when just by glancing at the kitchen wall while I'm having my morning coffee.

. It is a collection of spells, one for each day of the year, based on astrological influences, historical dates and holidays. Like the calendar, it takes much of the hard work out of being a witch because you don't have to spend a lot of time working out what magic you should be doing over the seasons.

The spells it offers are varied, from magical workings for prosperity and new starts in January through spells to cleanse your home in the spring, a recipe for a wild rose love mixture in the summer, tips on scrying and for wisdom in the autumn and a fun Saturnalia ritual in December.

Something that drew my eye after from my blog entries on cats this week is a cat petting meditation, which is recommended for October. It says that in Ancient Egypt stroking cats was akin to prayer as they were sacred animals. They are empathic and spiritually aware. Stroking a cat 82 times as a meditation is a cure for sorrow or anxiety. I'm sure the cats like it too.

Ha! I doubt my cat would even let me stroke her 82 times before running off!

I have two cats, brothers and identical looking, but one is a scaredy cat who doesn't like to be on a lap for long and the other is a tart who would happily be stroked all day.

Just started reading your blog... I'm loving it... started my own after seeing yours...

Thanks for the info...

Hear here for the lazy witches!!!