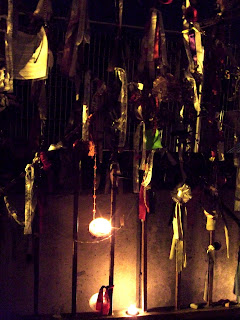 On Halloween, October 31, I took part in a celebration of The Halloween of Cross Bones. It was an amazing evening of ritual, performance, candlelit procession, honouring of the dead - and a bit of tantric sex thrown in.

Cross Bones is an unconsecrated burial ground in Southwark, South London, dating back to the 1500s. Up until the Victorian era it was used as a graveyard for prostitutes and other outcasts deemed too sinful to be laid to rest in hallowed ground.

The prostitutes buried there were known as "Winchester Geese", because they were licensed by the Bishop of Winchester to ply their trade in the area called The Liberty of the Clink, which was outside the jurisdiction of the City of London. It seems sad that these women who paid money to the church - and presumably serviced many a priest - were denied a consecrated grave after their death.

As well as prostitutes, the liberty held theatres, drinking establishments, bull and bear baiting pits and other facilities for entertainments forbidden within the city walls.

Cross Bones Graveyard was closed in 1853 because it was "overcharged with dead" and was lost and forgotten until The Jubilee Line underground extension in the 1990s, when bones were unearthed.

On November 23, 1996, writer John Constable encountered the spirit of a Winchester Goose buried at Cross Bones, through the mediumship of John Crow, another entity, which he calls his "shamanic double". He continued to work with the Goose and Crow for several years, during which time they revealed to him a cycle of poems, published as The Southwark Mysteries

The performance of these poems, in the personas of John Crow and The Goose, formed the main part of The Halloween of Cross Bones. The poems offer a bawdy but insightful look at the lives and deaths of whores of the liberty. I'd seen John Constable enact part of this at a pagan festival a year or so ago and had found it so fascinating I had been determined to come along to this Halloween event. If you get a chance to hear it for yourself, don't pass it by - you will not be disappointed.

The evening also included a more traditional pagan Samhain ritual, lead by Priestess Jacqui, and a rather less traditional tantric performance requiring audience participation by two lovely girls under the name Les Whores d'Oevres. This started with a sultry dance by the pair, followed by a few practical exercises the audience were invited to take part in.

Now, English people are known for being reserved when it comes to sex and I'm sure there were a few red faces in the room, although none of the activities involved removing clothing or getting intimate with strangers. And it certainly seemed appropriate to let go a little in the place that was once the Liberty of the Clink.

The website http://www.crossbones.org.uk/ also contains a petition for a garden of remembrance for those buried at Cross Bones Graveyard. This is one that in my opinion is worth signing.

I checked out the link--fascinating place. And an interesting spot for Halloween!

It was certainly different.

Christian Love in the Internet said...

Mysterious place, but personally I wouldn't like to visit it, especially at night. I understand that all these "feasts" are the ways to throw out the negative energy, but I don't think it's cool to be evil