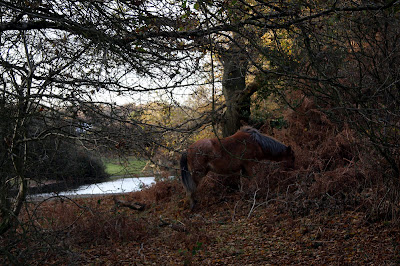 The New Forest, which lies mostly in Hampshire, southern England, but also touches on the counties of Dorset and Wiltshire, is a vast woodland that dates back nearly a thousand years. It was protected and named as a royal forest by William the Conqueror in 1080, mainly for hunting deer, but some of its heathland areas are far older.

The forest contains hundreds of barrows and ancient monuments. It has also accrued many intriguing legends.

One tale that I find fascinating connects The New Forest with the tales of King Arthur and Excalibur.

During the 1950s, a family were driving along one of the roads that cuts across The New Forest while on holiday. They passed a lake that was edged in mist. In the lake, a few metres from the shoreline, they saw a stone standing out of the water with a sword embedded in it. They drove past, but when they later tried to return, they could not find the lake again. Many people have also searched for it, but no one has ever found it since.

The New Forest sounds like a wonderful place to visit, and it brings to mind some local news. A nearby family has sold a large tract of land to the city with the agreement that it be used for open space. It will also help connect a nearby hiking trail network. Left alone over time, these places, like the New Forest, take on their own character and myth. We need more of that.

That is good news about you getting a new nearby open space. I agree that more of these places are needed.

I believe I lived in New Forest in a past life as a hermit. I have tried to do some research on the place and haven't had any luck. I wish to go there one day on vacation and visit just to see if it brings any more memories.
Blessings,
Grannulus

Oh my god 37 years ago appx I was driving through the same area I saw a lake on my left and in the lake there was a arm holding a sword protruding from it .I turned to my wife asking her what she thought she said of what .I explained what I saw she laughed at me .so I turned around drove up and down for ages nothing I have been a laughing stock to my family all these years .now I just stumbled on your site retribution at last.

Ok, I too saw a lake. But when I returned to same place the following week it was not there? I'm not talking small.... the lake was significant and why I wanted to return. I felt I needed to see again. This was in the new forest in hampshire in UK. Has any lake been drained? Why has it gone?