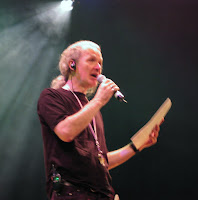 Witchfest International is always a highlight of the pagan year for me and this year's event, on Saturday 8 November, was no exception.

The festival is for witches and Wiccans of all backgrounds, whether they are new to the craft or experienced high priestesses. What I love about it is that the atmosphere is friendly, there are a huge variety of talks and workshops during the day followed by music and entertainment in the evening and, although there is so much going on and venue is packed, it is extremely well organised and seems to run without a hitch.

Keen not to miss anything, I arrived 15 minutes before it started. It was tipping with rain and I got soaked - along with everyone else in the massive queue - but the doors were opened on the dot of the start time and once I was inside I soon warmed up.

, gave an opening blessing and followed that up with a talk later in the morning entitled 24/7 Witchcraft: Spontaneous Magick for Daily Living. I took a lot of notes during her talk because I felt her style of magic was very like my own. I intend to type these up and post them to A Bad Witch's Blog some time over the next week.

After a break for lunch and some time browsing the wonderful stalls in the trade hall, I decided I needed to do something relaxing so I went to hear Wendy Andrew give a reading from her new book Luna Moon Hare: A Magical Journey with the Goddess

. This is written and illustrated by Wendy, and is a beautiful fantasy tale of a hare's journey through the cycle of the year, experiencing the joys and hardships of each season and meeting mythological figures along the way.

Later in the afternoon was something I had most been looking forward to, an Enochian magic workshop by Rufus Harrington. I had heard Rufus talk about the magic of John Dee and Edward Kelley at an earlier Witchfest, and an opportunity to use the Enochian language detailed by these famous Elizabethan magicians was something I didn't want to miss. Rufus explained that the "watchtowers" often referred to when witches call upon the elements to guard the compass points - or "quarters" - of a ritual circle come from the Enochian system of magic. He taught us the Enochian words for this and we then used these to create a circle, with groups of us calling the quarters using Enochian - which I have to say is really hard to pronounce. Afterwards, we all agreed we had experienced a very strong sense of the energy we had called upon.

There were many other talks and workshops that I would have liked to attend during the day, including New Research Into the Great Witch Hunt by Professor Ronald Hutton, but one never has time for everything. Still, there is always next year's Witchfest to look forward to, and I don't intend to miss it.

http://www.cassandraeason.co.uk/
Luna Moon Hare: A Magical Journey with the Goddess

Glad that you had a good time - you seemed to get chance to do the things I could not make it to! Also odd for me to think I have been reading your blog for some time now and I could have been standing next to you at one of the stalls (that seemed to extract far too much money from my purse!!) and would not have even known it!
By the time that I got to the Wendy Andrew talk - it was full. Such a shame. Professor Huttons talk was amazing.
It was my first WF - but I shall definitly be back next year!

Glad you had a good time - I certainly did!

This year was my first time at the event. It was BRILLIANT!! I'm making a note to go every November and May!
Blessed Be!
)O(
~Sam

Andy - I wouldn't give out someone's personal email address or phone number on my blog unless they had specifically given permission for me to do so. If you email me privately at badwitch1234@gmail.com with your full name and contact details and, if possible, your reason for wanting to contact Rufus, I will see about forwarding your message if possible.