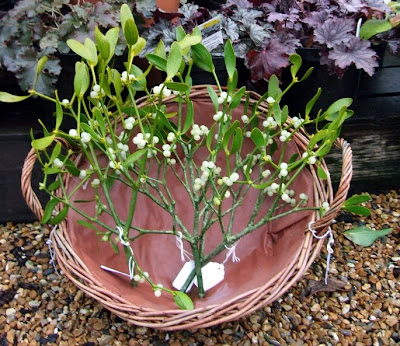 I get mixed feelings if I go to a party at this time of year and find mistletoe hanging from the ceiling. While I'm happy for a smooch with someone gorgeous, more often than not it is some obnoxious drunk who is angling for a snog.

According to some sources, the custom of kissing under the mistletoe is Scandinavian in origin and grew out of an old tradition that mistletoe is a plant of peace. Enemies who met under it had to maintain a truce for 24 hours.

In Norse mythology, Frigga, goddess of love, wanted to protect her son Balder. She made everything connected to the four elements - air, fire, water and earth - promise not to harm him. However, the trickster god Loki made an arrow from mistletoe, which was thought to live between the elements, and gave it to the blind god Hoder, who unintentionally shot Baldur through the heart.

In the legend, Frigga's tears of grief became the white berries on the mistletoe. Balder was eventually restored to life and Frigga turned mistletoe into a symbol of love, promising to kiss anyone who passes under it.

Another possibly origin for the tradition comes from the druids, who considered mistletoe sacred and associated it with fertility, protection and healing. The juice of the white berries was said to be the sperm of the gods. Mistletoe berries appear at around the time of the midwinter solstice, and are associated with that festival. The plant was harvested carefully, with golden knives and without being allowed to touch the ground. It was hung in doorways of homes to grant its blessings to those who lived there, and fruitfulness to those who kissed under it.

The ancient Greeks and Romans also thought mistletoe had supernatural properties. In Virgil's Aeneid, mistletoe is compared with the Golden Bough - a sacred mythological tree that had powers over life and death.

Some people consider mistletoe itself to be the origin of the idea of the Golden Bough and it is said to sometimes take on a golden hue, especially if the tree it lives on dies. Mistletoe's own powers over life and death come from the fact that it is highly toxic, but it has also been thought of as a cure-all. It has been used by herbalists to treat a variety of conditions including stress, high blood pressure and cholesterol, nervous complaints and even serious diseases such as cancer. Nevertheless, it can be lethal and should never be taken except under the directions of a qualified medical herbalist. Some people even get an adverse reaction to touching the plant.

Mistletoe is an evergreen that is hemiparasitic. That means it obtains water and some nutrients from its host - often an apple or poplar tree or occasionally an oak - but is also capable of photosynthesis. According to folklore, mistletoe has a symbiotic relationship with its host and helps keep it alive during the winter months. This is almost certainly not true, and heavy infestations can weaken a tree.

Nevertheless, mistletoe provides valuable food for birds during the winter months, particularly the mistle thrush, which gained its name because it helps propagate the plant. The bird excretes seeds in its droppings, which stick to twigs. Sometimes the bird grips the fruit in its bill, which it then wipes clean on another suitable branch.

With its background in folklore and legend, its herbal properties, its value as an evergreen plant bearing winter fruit and the modern custom of an excuse for a kiss, for a there are many reasons to bring mistletoe into the house for yule and new year celebrations. Just steer clear of it if the obnoxious party drunk staggers in your direction :)

Note: Never take herbal remedies except under the direction of a qualified medical herbalist. If you are unwell, consult your GP.

Hi! I really liked your forum, especially this section. I just signed up and immediately decided to introduce myself, if I'm wrong section, ask the moderators to move the topic to the right place, hopefully it will take me well... My name is Henry, me 34 years, humourist and serious man in one person. I apologize for my English

Hello there, just became alert to your blog through Google,
and found that it is really informative.
I am gonna watch out for brussels. I'll appreciate if you continue this in future.
A lot of people will be benefited from your writing. Cheers!

I really love your site.. Great colors & theme. Did you make this website yourself?

Please reply back as I'm trying to create my own website and would love
to find out where you got this from or exactly what the theme is
called. Many thanks!

Having read this I thought it was very informative. I appreciate you taking the time and energy to
put this content together. I once again find myself spending way too much time both reading and leaving comments.
But so what, it was still worth it!