Frau Holle: Goddess of the Week 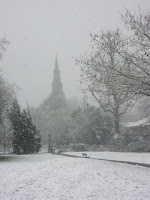 The festival of Frau Holle, the Germanic weather goddess, is celebrated on December 25, so it seemed appropriate to name her as The Bad Witch's Goddess of the Week.

Frau Holle is associated with witches and the wild hunt as the weather, and also presides over children, and household chores - particularly spinning.
It is said that when the snow falls, it is just feathers from Frau Holle's eiderdown as she shakes it out to freshen it up.

She also appears in the eponymous fairy tale by the Brothers Grimm:

Once upon a time, there were two daughters. The elder was spoilt and lazy, though much loved by their mother, while her younger sister was unloved and overworked.

Every day, the younger girl would sit outside the cottage and spin beside the well until her fingers bled. One day, while she was washing her hands, the spindle fell into the well. She leapt after it, but found herself in the world of Frau Holle. She remained there for some time, helping with the housework and doing chores. Frau Holle was so impressed by the girl's hard work, she sent her back home with an apron full of gold.

The greedy mother saw the gold and sent her other daughter down the well to get more, but Frau Holle was not impressed with the elder daughter's idleness and sent her back home covered in pitch to teach her a lesson.

Do a search for the Perchten - the scary figures that wander the Christmas markets in parts of the Swiss Alps. They are scary as hell and completely awesome. Same with the Krumpus, a big scary figure that accompanies St. Nicholas on his rounds. There are videos of them on YouTube.

Both are survivals of older Alpine pagan traditions.

Yes, The Perchten looks like a fascinating character. A brief web search told me that she is an ancient Germanic goddess who is supposed to be the cousin of Holda (or Frau Holle). Her name means Bright One and her festival is on Twelfth Night. The Krumpus is apparently one of St Nicholas' followers. He wears a black mask and black rags and drags chains behind him - definitely scary! Thanks so much for mentioning those characters.