The politics of my garden wildlife has changed again as a fox has returned to the den in the leaf pile by my back fence.

I'm not sure if it is the same vixen who made her home there last winter and then gave birth to cubs in the spring or if it is one of her cubs, now grown to adulthood. Yesterday, however, a fox was clearly in residence once more and Sin, a stray cat who I recently started putting food out for, was looking for a new bed. 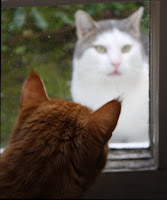 Sin has made it clear he would like to move into my house. I don't blame him; the weather has been below freezing lately. Unfortunately, I already have two indoor cats who don't get on at all well with Sin. Sin is a Tom cat and so are the two indoor ginger brothers, albeit neutered Toms.

When Sin and the Gingers meet face to face, fur flies. I photographed this meeting of moggies, with a window safely separating them, shortly after I photographed the fox above. There was much meowing, but at least they couldn't scratch each other's eyes out through the glass.

I am in a bit of a dilemma about what to do. I would like to make sure all the animals in my home and garden at least have a warm, dry bed and food. Sin now seems to have made a temporary home under an old piece of board propped up against the neighbour's fence, but that may not remain there forever. A friend suggested I buy a kennel for Sin, but knowing the contrariness of cats, Sin would probably ignore it.

The RSPCA will rehome strays, but I've got very fond of Sin and he seems to like my garden, so I'm reluctant to have him moved on. Any suggestions are welcome, so do leave a comment below.

You could try something like a smallish rabbit hutch outdoors that Sin *might* take to using, especially if you put his food in it.

If you did want to try to introduce him into the house, you could try a feliway diffuser (your vet would have these if you're not already familiar with them) in the area he and your cats would first 'share'. I've always used these to get my cats through times of transition, and we used the spray version at the shelter when I was a volunteer there.

We have an interloper too at the moment - a huge fluffy black cat who I think lives in the woods. He comes for food; yesterday I found him asleep at the top of the stairs! Some of our cats couldn't seem to care less, but Hades is incredibly unimpressed. I'm torn between wantign to help the homeless cat and not wanting my own to be distressed, so I totally sympathise with you.

One thing other - is Sin entire? Whether you take him in or not, having him neutered would be a Good Thing.

As I write this it is 10 degrees F here in the MidEast of the US. Yikes! My heart goes out to Sin and the vixen in the cold... I have friends with a family of strays they watch over, as they to have three indoor nuetered males. They set up a kennel - although a sturdy box or crate would do... on their back patio. Nearthe house for shelter, and filled with towels and blankets. A place to escape the wind, and burrow into the warm fabric. Now I know other people who do similiar things - and aded a heat lamp...like you would have for a lizard?
Those are my top-o-the-head thoughts, hope the solution presents itself to you!

Thanks to everyone for the suggestions. I think I'll try the rabbit hutch idea. Sin is indeed a "Real Cat" to quote Pratchett's The Unadulterated Cat, meaning he still has his balls. I do intend to take him to the vet to get that sorted, but I want to earn his trust a little bit more first.

If he won't take to a hutch, then if you have either a garden shed or a garage, you could try putting a cat door into either and making a nesting area inside.

Good luck - I hope you and Sin work this out.