Eros: The Bad Witch's God of the Week 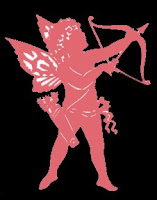 Eros, god of love and desire, is this week's Bad Witch's God of the Week.

"As the beautiful bittersweet God of Love, he's in charge of the heart and carries a lethal love weapon which no one can withstand. With two strings to his bow, he can fire golden arrows for love or leaden ones for indifference, so it's best to get on his good side if you're feeling smoochy. He is also known as cuddly Cupid to the Romans and Profit to the manufacturers of Valentine cards."

A statue of Eros stands at Piccadilly Circus, in London, and is one of the England's most famous landmarks. Dating from 1893, it was originally intended to represent an angel of Christian charity, but later came to be known as the Greek god of love. In my opinion, a triumph for passion and paganism!