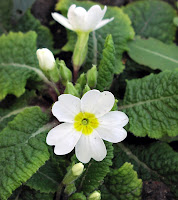 The snow has finally cleared from around my home, the rain has stopped - at least for a while - and primroses are blooming, making my garden look almost spring-like when the sun manages to break free of the clouds.

Primroses are not only one of the quintessential flowers of early spring - its name comes from the Latin prima rosa, meaning "first rose" - they are steeped in folklore and magical custom.

, primroses are associated with Freya, Norse goddess of love and marriage. However, a gift of primroses means "your inconsistency saddens me" in the language of flowers, according to Aphrodisiacs and Love Magic

by Pamela Allerdice, so you may not want to put them in a Valentine's Day posy, unless your lover really has been messing you around.

Primroses are also a fairy flower. Cunningham's Encyclopaedia of Magical Herbs says that blue and red primroses growing outside a house will protect it from adversities and attract fairies. Some folklore credits primroses with the ability to let people see fairies, either by eating their petals or by placing a bunch on a fairy rock or fairy mound.

In one German tale, a young girl found a doorway covered in flowers. She touched the door with a primrose and it opened to reveal a fairy castle. Germans believed primroses could open enchanted doorways and reveal hidden things, including treasure, and called the plant the "key flower" (schusselblume).

Historically, primroses were sometimes worn on the lapel to ward off madness or used in its treatment. The 17th century herbalist Nicholas Culpeper recommended primrose root juice "snuffed up the nose" for nervous disorders, in his Complete Herbal. He added that it "occasions violent sneezing" and should only be taken in small doses. He also said dried primrose root could be used as an emetic.

Other medicinal uses for primroses have included treating spasms, cramps and rheumatic pains. The plant contains salicylates - an ingredient of aspirin. An ointment made from the plant can be used on cuts and grazes.

As with a large number of wild flowers, primroses are declining in some areas and should never be picked without the permission of the land's owner.

Note: this is not medical advice. Always consult a qualified expert before taking any remedy. If you are unwell, consult your GP.

I am currently working on a mixed media collage for the Goddess Bloduewedd - and primrose is one of the 9 plants/tree/flowers used in Her magical creation by Math. "Primrose to attract love..."
I dont envision her as the betrayer of Gwydion as some do - but a Maiden who came into Her own, claimed her power and sexuality - and dared rebel - making choices of her own...
I digress...Loved the info on the flower!

Jenny: Thanks very much for the information about Bloduewedd's connection with primroses. I didn't know that. I also like your interpretation of the story. Good luck with your collage.