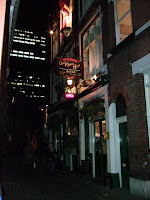 "I do believe in fairies," admitted author David Boyle in his talk on fairy superstitions at South East London Folklore Society last week.

In this day and age, with the recession biting, who can blame him. The concept of finding that pot of gold or a little man who can turn leaves or straw into riches certainly has its appeal.

David went on to say that belief in fairies seems to re-emerge at the start of centuries. There was much interest in fairies in the early 20th century. In the play of Peter Pan

, by JM Barries, the audience was asked: "Do you believe in fairies?" Like David Boyle, even the adults were happy to say they did.

Now, fairies are once more in the zeitgeist. There is a vibrant fairy subculture with various fairy festivals around the country, books on fairies selling well, fairy music becoming a sophisticated style of its own, and girls wanting to dress up with fairy wings. This concentrates on the squeaky clean aspect of fairy tales and sets aside their dangerous aspects.

Despite being enticed by the lure of fairy gold, it is the darker side of fairies that most interests David. He read the tale of Yallery Brown from the book Troublesome Things: A History of Fairies and Fairy Stories

This is the tale of a farmhand who met the fairy Yallery Brown. Yallery offered to do all the farmhand's work for him, on condition he was never thanked. However, people thought it very odd to see work being done by invisible hands and became wary of the farmhand, and eventually he asked the fairy to stop. Yallery refused so, in desperation, he thanked him. From then on, the fairy spoiled everything the farmhand did. He lost his job and could not get another. In the end the farm worker died alone and penniless.

This is one example of the cruel side of fairies. Other tales involve people being taken away for a 100 years when it seems like just an afternoon, or children being stolen.

David pointed out that in the Middle Ages it was not uncommon for children to die, and blaming it on fairies might be an easy way of accepting infant mortality. The concept of changelings could also be a way of explaining children with learning disorders or other psychological or physical problems that society at the time did not understand and could not treat.

Many fairy stories have a link with forbidden love. Children born outside wedlock - or from incest - were outsiders. Fairies are the ultimate outsiders and so are a way of talking about all things forbidden.

, by Christina Rossetti. In it, two sisters are tempted by pomegranates, grapes and suchlike offered by goblin men. Despite knowing these wares are said to be dangerous, one sister gives in and tastes them, but afterwards she sickens and fades.

The "fruit" in this poem is obviously symbolic of sex, but it is somehow more than just that. There is some unstated unspeakableness about it. Yet the goblins, and fairies in many tales, are not really depicted as evil. They are amoral outsiders who can nevertheless cause people harm, perhaps without evening knowing it.

Leaves the World to Darkness