Equinox Festival in London this June 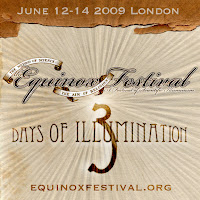 I'm always happy to be sent details about pagan events in London, particularly when they sound exciting and unusual.

So, I was delighted to be told about the Equinox Festival taking place on June 12, 13 and 14 at Conway Hall, 25 Red Lion Square, London and the Camden Centre, Bidborough Street, London. Described as a three-day media arts festival dedicated to spiritual discovery and mystical tradition, with the motto "The method of science; the aim of religion", it sounds just up my street in every sense.

The festival's headlining band is Comus. I must admit, I hadn't heard of Comus before - which is perhaps not surprising because they apparently haven't played in the UK for three decades. However, the website http://equinoxfestival.org/ has a clip of them and they sound very good, playing live celtic folk rock.

Other music performances in the line-up include Rob Mazurek, Burial Hex, James Ferraro (Skaters) and Chaos Majik (aka Todd Pendu).

But the Equinox Festival is not just about music. It also includes lectures from Ralph Metzner, Ph.D. a pioneer in studies of consciousness and transformation; Erik Davis, author of Techgnosis: Myth, Magic and Mysticism in the Age of Information

; Aaron Gach, co-founder and director of operations for the Center for Tactical Magic, psychonaut Matthew Wiley and many other fascinating speakers.

Then there's the Transcendental Cinema, which I feel I have to visit, if only to see The Mindscape of Alan Moore and Timothy Leary: 8 Circuit Model of Conscious.

This really does sound like an event not to be missed if you are anywhere near London.

Tickets cost £80 and have just gone on sale via http://wegottickets.com/
Posted by Badwitch at 07:01