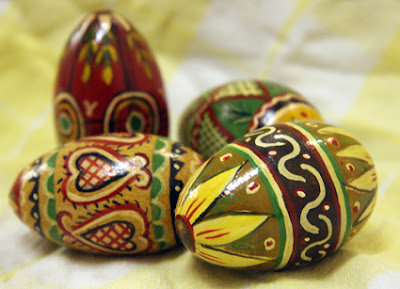 Although I'm not a kid - or a Christian - I like getting Easter eggs, even if the overpackaged brand-name chocolate Easter eggs we get in the shops are yet another commercialisation of a far older custom.

For Christians, eggs are a symbol of rebirth at Easter, a tradition that can be traced back at least as far as the 4th century, when there are records of people presenting eggs to the Church to be blessed. Painted hen's eggs were traditional gifts in much of Europe in centuries past, although in eastern Europe painted wooden eggs were popular gifts. In the 19th century, if you moved in wealthy circles, you might even be lucky enough to be given a fabulous jewelled Faberge egg as a present.

Eggs are also symbols of birth, resurrection and creation in religions and cultures all over the world. In the mythologies of India, China, ancient Egypt and ancient Greece to name just a few, gods and goddesses - or indeed all of life itself - are said to be hatched from eggs.

This universal and ancient fascination with eggs makes them a powerful symbol.

In An Egg at Easter: A Folklore Study

Venetia Newall speculates that primitive man must have seen birds hatching from the smooth ovoids that seemed otherwise like lifeless stones and thought magical forces were at work. She says that the idea of the world egg as the origin of the universe and the creator of life itself could have developed from this.

As well as representing creation, eggs represent mystery. They hold a secret inside that can only be revealed when the egg is opened. When you crack a boiled egg with your spoon at the breakfast table, you can't be totally sure if the egg will be hard or soft, good or bad, mostly full of air or even have a double yolk.

Venetial Newall says: "There are so many strange conceptions about the egg: on the one hand it is pure and sacred and the bearer of radiant new life; on the other hand there is a secret inside, out of which anything may come to life: good and joyful, or bad and filled with hatred."

As one example, she states: "At the turn of the century (19th-20th) nobody in High Albania dared to set an egg for hatching without first drawing the sign of the cross on it; otherwise some monstrous creature might creep out of it."

Of course, fish lay eggs as well as birds, and many creation myths and origin stories - as well as theories of evolution - say life came out of the water. Indeed, in some distant time the first land-dwelling creature very likely hatched from an egg laid by something that crawled from the sea to give life.

Which does answer the old question: What came first, the chicken or the egg? The answer being the egg, which was laid by something that hadn't quite evolved into a chicken.

An Egg at Easter: A Folklore Study

, by Venetia Newall, can be ordered via Amazon.

Links:
An Egg at Easter: A Folklore Study