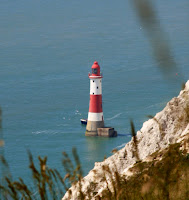 Beachy Head, with its red-and-white lighthouse standing before it, just out to sea, are icons of the English coast.

The beautiful landscape and views from the top of the tallest chalk cliff in the country, 530ft above sea level, are popular tourist attractions - but it seems to represent more than that: danger from the treacherous, crumbling cliffs and waves crashing onto jagged rocks at their base, but also a guiding light and a beacon that can steer one to safety.

The lighthouse is both a real example of human endeavour to make a dangerous world safe and a symbol of spiritual, emotional or intellectual guidance in seas of uncertainty.

Lighthouses have always fascinated people. In the ancient world, the Lighthouse of Alexandria, at Pharos, in Egypt, was one of the Seven Wonders of the World because it was one of the tallest man-made structures and because it was, for its time, an amazing feat of design that guided shipping safely into harbour. It was built in 280BC and was 440ft tall.

There has been a lighthouse off the coast at Beachy Head since 1902, although one had been built on top of the adjacent headland earlier, in 1831. Beachy Head lighthouse was originally manned, but is now automated.

Although lighthouses are commonly seen as symbol of safety, I always feel there is something precarious and dangerous about them. They are built to withstand tremendous storms at sea and are great feats of endeavour, but there is always the risk they will not survive their constant conflict with the elements.

Seen against lightning and huge waves, they can seem very like The Tower card in the tarot deck - often seen as indicating destruction. Before automation, the isolation and risks involved in living on a lighthouse were known to take their toll on keepers and some did go mad. It is these things that make lighthouses appropriately scary settings for horror films such as John Carpenter's The Fog.

The cliffs at Beachy Head have a similar sense of both stability and precariousness. They are vast and ancient - dating from the late Cretaceous period 100 million years ago - yet the soft chalk is constantly being eroded and there are frequent rock falls. Buildings at the top will inevitably collapse as the sea wears away at the base and the land falls into it.

It is also not surprising that the area was a famous suicide spot, although constant vigilance by volunteers from groups such as the Samaritans has reduced the numbers for deaths from 20 a year to about seven. Yet more than being a site of destruction, I feel the area is a good place to contemplate change. Another film, Quadrophenia, shows a man walking away from the cliff having made a momentous decision to give up a destructive form of life and simply grow up.