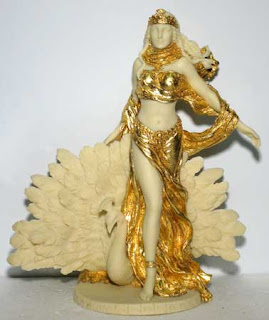 Hera, Queen of the Gods, is my current Goddess of the Week because she is a powerful lady - and I think I need a bit of powerful female help at the moment after my elderly and frail mum broke her wrist last week.

I need to be strong to deal with the various doctors, care workers and social workers in charge of my mum's case, to make sure she gets the best possible treatment and a good chance of recovery.

However, I also chose Hera as my Goddess of the Week because I saw this lovely statue of her on the pagan website Pagan Magic.

In Greek mythology, Hera is the consort and sister of Zeus. She is usually seen as a goddess of marriage and birth - nurturing, watchful and beautiful. She also had a quick temper against those who crossed her - particularly the objects of her infamously unfaithful husband's extra-marital attentions.

Hera was a powerful goddess in her own right, even before her marriage to Zeus. Known as The Queen of Heaven, she ruled over every aspect of this world and the starry skies, including the seasons and the weather.

Hera means "great lady" and the English word "galaxy" comes from the Greek "gala", which is "mother's milk". According to mythology, milk from Hera's breasts formed the Milky Way and all the stars within it.

The Hera statue is available at Pagan Magic's online store for £44.99.