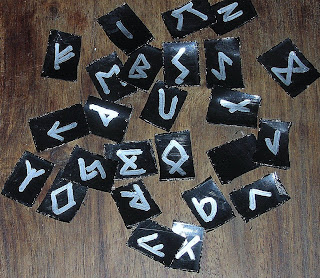 As this is Recycling Week I was trying to think of another pagan recycled art project other than my fortune telling deck made from greeting cards.

After eating a ready meal, I came up with the idea for a set of fortune telling runes made from the used container.

Now, I know ready meals are generally a Bad Thing. They are expensive, full of salt and fat and stuff that's unhealthy, and the containers they come in aren't easy to recycle. But, I'm a Bad Witch and I admit I do sometimes eat Bad Things - even the occasional ready meal.

But I'm feeling slightly less bad now that I've thought of something to make out of the container - my recycled runes.

First, I cut the ready meal box up into little plastic oblongs. To stop them being sharp and a bit flimsy, I slightly melted each side on the electric ring of my cooker. This rounded the edges nicely and also made each oblong feel more substantial.

I'm not sure the fumes given off when the plastic melted were quite in keeping with my environmental aim - they smelled foul and were probably toxic. Even with all the doors and windows open, I was probably in danger of poisoning myself, but I was moderately pleased with the end result after I'd drawn the runes on the oblongs with a silver pen.

What I particularly like about my new set of runes is that they are small and light and much easier to carry around in a pocket or bag than a set on actual stones.

And seeing as they are made out of something almost totally non-biodegradable, they could foreseeably last until Ragnarok.

I love the idea of greetings card Tarots - to me they have always been a way into meditation and a way of the universe telling you what to think about. In my case, it's probably going to be fairy cakes, puppies and kittens.

And there's nothing wrong with THAT...

From now on I will always think of microwaved dinners as Dready Meals. And I certainly hope all our futures hold puppies, kittens and fairy cakes.