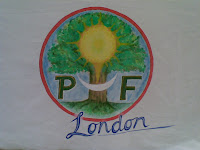 Gaia-Sol - the deities of the earth and the sun - were chosen for the name of Pagan Federation London's third convention on the Gaia theme, which took place in London yesterday. Last year it was Gaia-Fortuna, and the year before that was simply called Gaia. I'm not sure if there will be a fourth, but I hope so.

I had a fantastic time at Gaia-Sol, not only because I heard some great talks on interesting subjects, but because the event was wonderfully friendly. I don't think it just seemed friendly because I met so many friends there - although I did - it also had a relaxed, welcoming and happy atmosphere.

It was the kind of event where everyone was invited to join in and take part, but without any criticism if they really only wanted to sit back, watch and listen.

Take the opening ritual, for example. In this, ritual group The Tribe of Avalon called for people to come and join the circle and call out anything they wanted as the elemental quarters were welcomed. The main part of the ritual involved weaving a web of yellow and green yarn by throwing the balls back and forth across the circle. It was a joyful summer game, so simple yet right for the season. And it was a reminder that, as pagans, we are all part of a fun, friendly community.

Community and relationships were also themes in the talk by druid Emma Restal Orr, entitled Paganism in the Modern World. She pointed out that although many people see paganism as a solitary spiritual path, where we can believe what we want and do what we want, it is our relationships with others that truly define us. Friends, family, colleagues and the community we live in can teach us as much if not more about ourselves as we can learn by meditating alone.

Towards the end of her talk, Emma mentioned a reburial of ancient bones that she had helped organise. Remains from the Roman era had been disinterred from a building site. After archaeologists briefly studied them, they were returned to the community to rebury. People from all parts of the community came to the funeral to honour those they saw as, at least symbolically, their ancestors.

The PF committee and the PFL team called on pagans to add to the community spirit and to help build relationships. A panel of PF luminaries talked about how they got involved in paganism and the PF, explained their current roles and also asked for more volunteers to help. I was fascinated to learn about the chaplaincy work the PF does in prisons, hospices and hospitals. If I wasn't so busy caring for my own elderly mum, I could be tempted to volunteer myself.

And as unlikely as it might sound, Steve Wilson's talk on Paganism and Sex even had roots in a community project, when he was asked to take part in a multi-faith project answering questions from school children about sex and morality. I'll be writing more about Steve Wilson's talk later in the week, because I think the subject deserves more than just a few lines.

The earth and the sun may have given their names to this convention, but the forms they took were the earthly communities and relationships we form, and the sunny warmth of friendship and kinship. These are vital things and it is right to honour them.