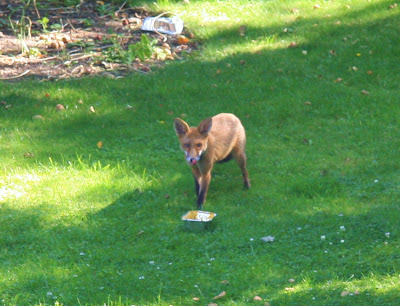 The latest foxy resident in my garden is a lonesome youngster - hardly more than a cub.

I first saw - or rather heard - him in my garden all on his own about a month ago. One evening, there was a terrible racket outside my bedroom window and looked down to see a fox cub in my yard.

He was running around, crying out loudly, as though he was calling for his mum. But mum never came.

At the time, I wondered if he had been abandoned; perhaps even orphaned.

I saw him in my garden almost every day after that. He took to sleeping on the leaf pile at the end of my garden - frequently used as a soft and sheltered bed by wildlife and as a fox breeding den in the spring, and I regularly put out scrap food for him.

As you can see from the picture above he seems to be thriving and is getting quite tame now; sometimes trotting right up to my kitchen door, sniffing around for anything edible.

His favourite food is curry, and you can see him licking his lips after enjoying some leftover chicken Madras and sag aloo. He also seems to like the saucers of beer I put out to catch slugs.

Don't blame him--I'd hang around, too, for beer and curry!