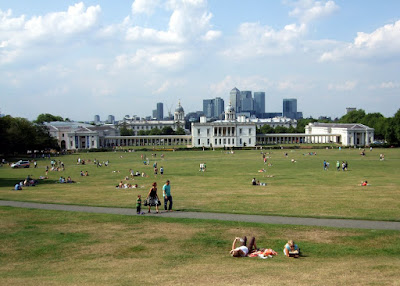 Goddesses of summer, virginity, winter and sex have their homes in Greenwich Park, and have been honoured there since pre-Christian times, according to folklorist Jacqueline Woodward-Smith.

Last Sunday, Jacqueline led a guided walk through Greenwich Park on the subject of The Greenwich Mysteries. The mysteries are to do with feminine powers.

This is most obviously apparent in Queen's House, a grand building within the grounds of the park and now part of the Maritime Museum (pictured above). It was once the home of King Charles I's Queen, Henrietta Maria, but was originally built by King James I for his consort, Anne of Denmark. She died before it was finished, and psychics say the building has an air of sadness about it. In 1966 ,Rev Hardy, a visitor to the house, photographed a ghostly woman on the staircase.

But the mysteries of the site go back much further. Archaeologists excavating at the site of the house found pagan Saxon burials and also a brooch depicting a tall woman and a short man with a huge erect penis. This is likely to have been a grave offering and might depict a pagan goddess and god.

While Queen's House overlooks the central sweep of the park, Jacqueline said the left-hand and right-hand sides are divided between goddesses of summer and winter.

A path to the left of Queen's House, that Jacqueline said is known as Lover's Walk, leads past a beautiful stone with a basin of water inset into it. This is called The Motherstone. 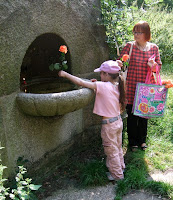 It was once a drinking fountain fed by a spring far below, but the cup that once hung there for public use was removed because the old lead piping was unsafe. However, water still fills the bowl and it is considered a shrine to the dark goddess by local pagans. A candle was burning in its recess last Sunday and Jacqueline had brought a rose to leave as an offering. The picture right shows it being placed there by a young "Princess in Training", as proclaimed by her T-shirt, with Jacqueline standing behind her.

Jacqueline said the origins of the stone itself are unknown, but it is not local. Psychics think it might have once been part of a stone circle at Bluebell Hill, in Kent.

Greenwich Park is also the site of a Roman building thought to be a temple, which was discovered in 1902. Archaeological excavation have found hundreds of scattered Roman coins, a tile dedicated to sacred spirits and also a statue of a goddess with a shield. Some people think this might represent Diana and could mean Romans worshipped the virgin goddess of hunting there.

On the other side of the park lies a pagan Saxon burial ground (picture below). Grave mounds mark what could be the site of an Iron Age battle, according to local legends. It was first excavated in 1784 and finds sent to the Ashmolean Museum. These included weapons and a large bear claw.

The burial mounds are on high ground that was once called Snow Hill, and in the 19th century gained the name Plum Pudding Hill, which links this side of the park to winter. Leading through this site of death is an old trackway that aligns with sunrise on the Midwinter Solstice. Mirroring Lovers' Walk, this path has been called Brazen Face Walk, or even The Trackway of Carnal Delights, because it leads down through the park to streets outside that were once Greenwich's red light district. It offered an overview of activities one had to be brazen not to turn away from.

This path passes one of Greenwich Park's more hidden mysteries - the Snow Well. There was once an actual well there, in a bell-shaped enclosure, but it has long vanished. All that is left is an indentation in the ground that is hard to spot unless you know what you are looking for. It gets muddy in winter, but no water rises there these days. Local pagans consider the Snow Well sacred to Holda, the goddess of snow and winter, who is also called Frau Holle.

Jacqueline said that Holda is also a goddess of sex - so perhaps she would have approved of the lewd activities of the red light district that her well overlooked in bygone days. It is also said that women standing in the depression of the well sometimes experience strange but not unpleasant sensations...

To find out more about The Greenwich Mysteries, Jacqueline recommended the book Guardians, Goddesses and Groves: Awakening the Spirit of the Land

by pagan historian Jack Gale. Jack is an expert on Greenwich folklore and his book, she said, provided much of the information for her guided tour of the park.

The walk was organised by the South East London Folklore Society. 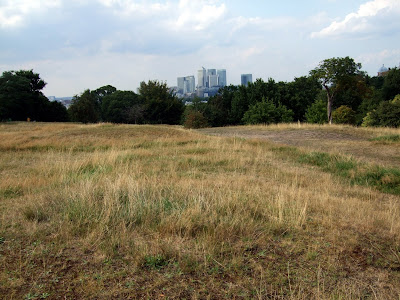 Amazing the amount of wishful thinking that can be applied to history.

Just reading Jack Gales book, and as a native of South East London, in exile, I am enjoying it immensely! as a teenager Blackheath and Greenwich was my stomping ground, also being very sensitive,I had some encounters that on reading Jacks book and your post, make total sense! Nice Blogg by the way, will visit!
Blessings