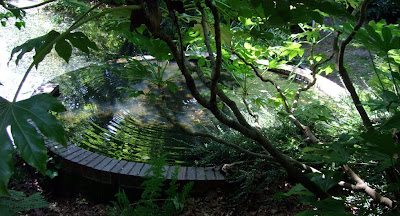 There are about 20 sacred springs in and around London, many have long disappeared from view, but a few still remain visible. Some, like St Blaise's Well, in Bromley, Kent, are beautiful places to visit on a hot summer's day

St Blaise's Well is in the grounds of Bromley Civic Centre, which until 1845 was the Bishop's Palace, where the Bishops of Rochester lived.

The site was granted to Bishop Eardwulf by King Ethelbert II of Kent in 750 AD, but the spring surrounded by oak trees had long been considered sacred before then - almost certainly since pagan times. The bishops built a well a few hundred yards away from the source. Its chalybeate water, containing traces of iron, was believed to have healing properties.

Pilgrims began visiting the well and an oratory was built close by. This was dedicated to St Blaise, the patron saint of the wool trade, because the market town of Bromley and the sheep-rearing area of north Kent relied on this commerce. Though, like the well, St Blaise may have had pagan origins. According to Cannonized Pagan Legends, "Blaise is equivalent to the Slavic horse-god 'Vlaise', one of Diana's lunar consorts."

After the Pope granted 40 days' remittance of penance to those who visited the well at Whitsun, pilgrimage naturally increased. This stopped with the Reformation and the well became disused. It was lost until 1754 when it was rediscovered by a Mr Harwood, the Bishop's chaplain, who noticed a "yellow ochrey sediment, remaining in the tract of a small current, leading from the spring to the corner of the moat, with the waters of which it used to mix".

In 1756, Thomas Reynolds, a surgeon, tested the water's medicinal qualities and wrote: "The water of this spring is much richer in mineral contents than the water of Tunbridge Wells."

After the rediscovery, the well was restored and a shelter that looked like a small pillared temple with a thatched room built over it to protect it. In the Victorian era it became a popular place for those with ailments to visit and drink the water in the hope of a cure.

The temple-like building is now lost, but at the end of the 20th Century a beautiful walled pool was built in the grounds of the Civic Centre, with the outfall of water running into a large lake with a fountain in the middle. Although it is not just a natural spring these days, it still feels like a sacred place.

It is surrounded by trees and a woodland walk runs from around the well and lake. It is a lovely place to visit and take a stroll, and perhaps then sit by the pool and spending a few moments in quiet reflection.

If you fancy doing this as part of a longer walk, you can download one at http://www.london-footprints.co.uk/wkbromleyroute.htm

Other sites of sacred springs in London that I have written about include Holywell, London EC2 and two springs in Greenwich Park.

There are so many hidden delights in London. Sadly some of the real gems and fizzling out. I remember a crsytal shop near Kew Gardens tube station. Jammed packed with crystals and trinkets covered with dust. An alchemists dream. I found a really thick amethyst torq there held together with old gold inscribed with ogham. An antique. It is he one thing I always wish I could have bought.

Hello, thank you for this post. Is the well accessible in order to collect water from it?

Yes, you could easily collect water there but I wouldn't recommend drinking it - I'm not sure whether the source is clean these days.

Hi
Nice account. Ive done a similar post about the site on my blog insearchofholywellsandhealingsprings.wordpress.com. I've borrowed your picture...with a link if that's okay. I can remove it if not. All the best Ross

Hi Ross, that's fine - thanks for letting me know!