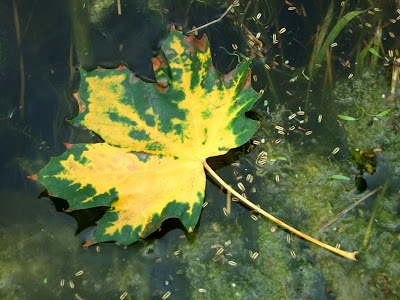 I photographed this autumn leaf that had fallen into a stream because I loved its colours - yellow and gold edged with green and the hint of brown. But if folklore is to be believed, perhaps I should tried to have caught it as it fell instead of simply admiring it where it lay.

According to one superstition, if you catch a falling leaf in autumn, you will be free from colds all winter. Another saying is that for every leaf you catch, you will have a lucky month the following year.

Edwin Radford, author of the Encyclopedia of Superstitions 1949


"The peculiar belief mentioned in the first of the above superstitions was forcibly brought to the mind of the author one day in Hyde Park, London, in the autumn of 1946. A man and woman pretty well advanced in years stood looking up at an oak tree from which leaves were being blown by the wind. After making several attempts to catch a leaf, they at last managed to do so, the man first and the lady subsequently. They then walked away, apparently satisfied with the game.
"A question to them elicited the fact that they expected to be free from colds in the head by reason of their performance. The author quoted to them the superstition in which they apparently believed. To this and a further question they announced that they were country bred, from the shires, and that since coming to London more than 20 years ago they had regularly caught falling leaves in the autumn. 'And we've never had a cold yet,' they concluded."

Once you have caught your leaf, keep it safely throughout the winter - until new green buds appear on the trees in the spring.

I'm going to stand under a tree with a net. I've caught so many colds this year I could do with a few months without one.