A Day for Doreen Valiente 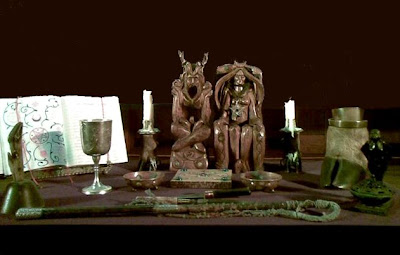 The beautiful altar pieces in the photograph above took pride of place at the front of the stage at the Charge of the Goddess Conference in London on September 13. The items all belonged to Doreen Valiente, the Mother of Wicca and Gerald Gardner's High Priestess. She was also the author of The Charge of the Goddess - the most famous set of lines from the Wiccan Book of Shadows as well as writing the influential books Natural Magic

and An ABC of Witchcraft Past and Present

The unofficial name of the conference was A Day for Doreen - it was to honour and remember Doreen Valiente, 10 years after her death, in September 1999. It was organised by John Belham-Payne of the Centre for Pagan Studies, of which Doreen was a patron. She bequeathed him all of her magical items, including those in the picture above, and asked him to carry out her funeral rite. This was a small event, so John promised to do a Day for Doreen so that everyone who loved her, knew her or respected her work could celebrate her life and remember her.

To be honest, even the sizeable venue of London's Conway Hall wasn't large enough to hold everyone who wanted to take part in the Day for Doreen. I was extremely lucky to get a ticket, as they sold out well before the event.

I am so glad I was there - not only to honour an incredible woman, but also to hear the illustrious speakers on the day. These included: Professor Ron Hutton, author of The Triumph of the Moon: A History of Modern Pagan Witchcraft

; Marian Green, a close friend of Doreen and the author of A Witch Alone: Thirteen Moons to Master Natural Magic

; Ralph Harvey, a former member of Doreen's coven; Maxine Sanders, co-founder of Alexandrian Wicca with Alex Sanders; Fred Lamond, a Wiccan who is active in interfaith work and the author of Religion without Beliefs

; and Janet Farrar, friend of Doreen and author of A Witches' Bible

with Gavin Bone, co-author of The Pagan Path: The Wiccan Way of Life

. These people are probably the most influential Wiccans alive today and it was extremely moving to hear them talk about their memories of her and her legacy for modern pagans.

John Belham-Payne also spoke about his memories of Doreen, his work with the Centre for Pagan Studies and future plans. These include a museum in Sussex to house the items Doreen entrusted to him and to continue the work of the centre.

He is also planning to organise another conference next year. This will be The Charge of the Goddess Conference 2010 - A Day for Gerald, to honour Gerald Gardner.

The event was filmed and a DVD of it should be available some time in the future. So, if you weren't able to get there you will still have a chance hear the wonderful talks at the historic Day for Doreen.

I've been asked to mention the whole team who helped organise the event - Brian and Trish Botham and all the unpaid and very much overworked helpers are part of the CFPS as well as John Belham-Payne.

Thanks everyone for your hard work - it was a wonderful day!