Initiation - just a bit of a game? 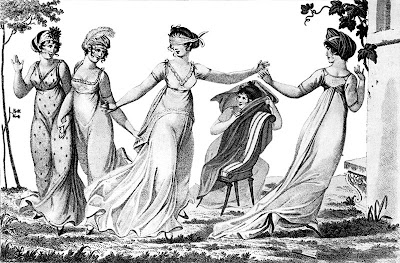 One question asked to the speakers at the Charge of the Goddess Conference on September 13 was whether a witch needed to be initiated by another witch, or whether one could become a witch alone.

The dictionary definition of the term "initiation" is: "A ceremony, ritual, test, or period of instruction with which a new member is admitted to an organization or office or to knowledge."

Yet plenty of books have been published with self-initiation ceremonies, for would-be witches who didn't live anywhere near an existing coven or who preferred to worship the ancient gods and goddesses and work magic on their own.

Over the years, this has caused a bit of a row in witchcraft circles. Hardliners said such solo rituals simply wouldn't work and no one should call themselves a witch unless they had been initiated by an initiated witch.

The picture at the top of a page might look rather like a magical initiation ceremony - at least to those who have undergone one - but it isn't. It is some ladies playing the game Blind Man’s Buff.

But, let’s face it, initiation is a bit of a game, isn’t it?

I am of the opinion that if you want to belong to a club that insists members go through some sort of hazing ceremony - whether that be a coven, a society or a schoolyard gang - then I guess you have to go through with it. But I don't think a witch has to join any kind of group unless she wants to.

I know I am being a bit unfair. Initiation can be a powerful ritual. It can help bond a person psychologically with others who have gone through the experience. It is supposed to cause a process of change to begin within the person being initiated and is a symbolic death and rebirth into a new state of being.

But I am firmly of the opinion that these changes can happen through life experience, without a formal ceremony, or that an individual can devise their own initiation ritual or find something that suits them in a book or online. If the ancient gods and goddesses wish to lend their power to a self-initiation ritual worked by an individual, then they are more capable of doing so than any human high priest or high priestess.

If you believe in spiritual initiation, then the gods and goddesses must have initiated the very first witch, priest or priestess without third-party help. Why would the refuse to do so again?

So if anyone tells you that you aren't a proper witch because you're not in their gang, don't believe them. A true witch doesn't play other people’s games unless she wants to.

And I was delighted to hear the luminaries at the Day for Doreen express that same opinion. Self initiation - or self dedication as some prefer to call it - is quite OK.