Mystical & Legendary London in a day 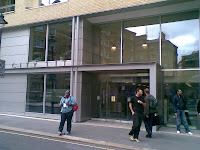 The course, which ran from 10.30am to 4.30pm, aimed to explore the history and legends of our capital city. I felt it was something of a tall order to cover so much in just one day, but I wasn't disappointed.

As course tutor and City of London guide Robert Stephenson said, London is an ancient place and human activity on the site predates the Romans by centuries, if not millennia. It is also a city that has been perceived by many as having its own spirit - depicted in such things as a Roman statue called The Spirit of London that is now in the Museum of London.

In the morning, we were taken on a visual tour of London's origins - beginning with slides of the prehistoric mounds in Greenwich Park and Boudicca's Mound on Parliament Hill. According to Geoffrey of Monmouth's The History of the Kings of Britain

, written in around 1135, the city was founded after the Trojan Wars by the hero Brutus of Troy. Legends say that he was guided to the site by the Goddess Diana.

Brutus gave his name to the country Britain, but it was King Lud, who lived in the city in 73 BC and called it Caer Ludd, or Lud's castle, who gave London the origins of its current name. Ludgate is also named after him.

Brutus and Lud are joined by another king as legendary protectors of London. King Bran the Blessed's head is said to be buried in the Tower of London, facing France, to ward off Britain's enemies.

London's churches are steeped in legend - which isn't surprising as many are built on ancient foundations, sometimes on the sites of pre-Christian temples. When St Brides burnt down in the Second World War, archaeologists found six churches had been built there, the oldest being a Roman temple. St Brides Well, also on the site, was probably used for pagan rituals even before the Romans built there.

In the afternoon, Robert related tales of ghosts, including Maggs bookshop - supposedly the most haunted house in London, although the bookshop owners say no ghosts have been seen there in recent times, and Cleopatra's Needle, on the Thames Embankment, where the spirit of a suicide is said to linger. Others have claimed to see an angel hovering over the water there - and one recent sighting was *almost* captured on YouTube.

Other topics covered included sanctuaries, ley lines and London's terrestrial zodiac. I hope to write more about these on my blog some time soon.

It was a fascinating day, with an extremely knowledgeable speaker. Robert Stephenson will be giving a lecture on Wednesday 28 October entitled The Gruesome History of Bodysnatching at The Mortuary, St Marychurch Street, SE16 4JE. The event is organised by Rotherhithe and Bermondsey Local History Group. It starts at 7.30pm and costs £1.50. For more details visit http://www.kingstairs.com/rotherhithe/

To find out more about mystical and legendary London, here is the reading list of books of interest that Robert Stephenson handed out at the course:
The History of the Kings of Britain

by Geoffrey of Monmouth c1135
Guide to Legendary London

by Lewis Spence
London Walks and Legends (A Mayflower book)

by Peter Underwood
Patterns of Thought: Hidden Meaning of the Great Pavement of Westminster Abbey

by Richard Foster
Old Customs and Ceremonies of London

by Chris Street
The New Jerusalem

by Merlin Coverley
Posted by Badwitch at 08:01

There's a story told that Arthur Pendragon unearthed Bran's head, claiming that Britain needed no other protector save him. And then came Guinevere, and Lancelot, and the fall of Camelot.

Indeed - thanks very much for that comment, jfs. The story of King Arthur diggin up Bran's head was also related by Robert Stephenson. The day was full of so many interesting pieces of information, but there was no way I had space on a single blog entry to mention them all.

"Spirit of London" ... I lived in London as a student, and never felt more at home in a place. The city's hold on me hasnt lessened in 20 years, my spiritual home? I love your entries on events like this, although it pains me a bit, as I live in the States! 'sigh'
I for one cant wait to hear more...

I did this course some years ago and it was a wonderful introduction to London's myths and legends. A piece by Robert appears in The Aquarian Guide to Legendary London, which I think is now out of print but available fairly easily second-hand. It very much covers the same ground as the course but in more depth.

I have a battered but much-loved copy of The Aquarian Guide to Legendary London. I can also thoroughly recommend it - and might even write something about it on my blog in the future.

Im Glad it was helpful :)

Hi! This is my first comment here so I just wanted to give a quick shout out
and say I truly enjoy reading through your
blog posts. Can you suggest any other blogs/websites/forums that deal with
the same subjects? Thanks for your time!

I'll immediately take hold of your rss feed as I can't
to find your email subscription hyperlink or e-newsletter service.
Do you have any? Kindly let me understand in order that I may subscribe.
Thanks.

Click on "follow by email" on the right hand side of the page to get an RSS feed.