The London Stone: The ancient heart of London 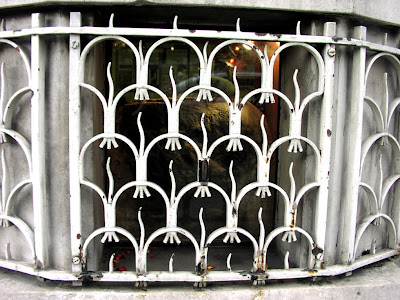 The London Stone - a worn limestone block - is one of the city's most ancient relics and also one of its greatest mysteries.

It currently stands in a metal cage embedded in the wall of an old bank at 111 Cannon Street, almost opposite the tube station, but its origins are lost in the mists of time. That, at least, is what you will read if you do the Ghosts of the Old City walk in the London History and Mystery

book of walks. The book goes on to say:


"It has been suggested that it was once part of a ritualistic or sacrificial druidic altar or stone circle. The most popular theory, however, is that it was a Roman milestone."

Actually, calling The London Stone a milestone is probably a great understatement. William Camden in his great work Britannia

According to The Aquarian Guide to Legendary London

, tradition says The London Stone "was originally a temple altar-stone laid by none other than Brutus the Trojan, the mythical founder of Britain". The book states:

"Because of this, it was considered to be a sacred object upon which oaths were sworn. The stone was also the point from which authoritative proclamations were made. Also, the tradition of striking one's sword against the stone as a symbol of sovereignty was observed in 1450 by the Kentish insurgent, Jack Cade. On striking his sword on the stone he declared himself Lord of the City."

Jack, the rebel and people's hero, came to a sticky end shortly afterwards, so this example is perhaps not the greatest proof of The London Stone's mystical powers. However, the stone has fascinated people for centuries. Queen Elizabeth I, her occultist John Dee, playwright Shakespeare, architect Sir Christopher Wren and poet and visionary William Blake all believed that the stone was of great symbolic and perhaps mystical importance.

City of London guide Robert Stephenson pointed out in his lecture on Mystical and Legendary London that The London Stone stands on important London ley lines, including Alfred Watkin's Strand ley. This runs from St Martin's Ludgate through St Paul's Cathedral, along Cannon Street, through The London Stone to All Hallows and ends at Tower Hill, where The Tower of London stands.

Hedley Swain, archaeologist at the Museum of London, has confirmed that The London Stone is ancient, but said there is no way of confirming its date or original purpose. 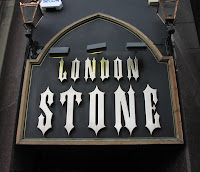 People today still venerate The London Stone. When I photographed it, I noticed flower petals had been put through the grating in front of it, an offering to the ancient and enigmatic geomantic marker.

A couple of doors away, The London Stone has also given its name to a fun gothic-themed pub, run by the Eerie pub chain. With an interior designed like the set of a horror film, this pub is definitely worth visiting after an autumnal walk around London's sacred sites in the run-up to Halloween.

The Aquarian Guide to Legendary London

Britannia: or, a Chronographical Description of the Flourishing Kingdoms of England, Scotland and Ireland, and the Islands Adjacent; From the Earliest Antiquity. Three volume set

didn't know about this, thanks for the story, worth studying...