Anubis: God of the Week 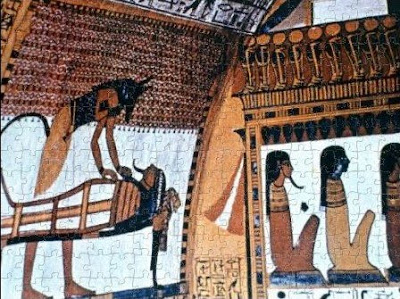 Anubis - also known as The Opener of the Way - is the ancient Egyptian guardian of the gates of death, the guider of souls on their passage to the afterlife and, some say, even holds the key to time. He seems the perfect choice for this week's Bad Witch's God of the Week.

Anubis is usually thought to be a jackal, or a jackal-headed man, but no one knows for sure what kind of canine figure the hieroglyphs that depict the deity were originally intended to portray. They may have been based on the wild dogs that hunted for food around the necropolises of ancient times.

As it says on the eternally-humorous Godchecker.com: "Is he a doberman or a jackal? No-one really knows for sure. ('Down, Anubis down!')"

Some say Anubis took canine form to help Isis and Nephthys search for the pieces of Osiris’s body, so that he could be resurrected after he was murdered by Set.

Anubis' origins are further shrouded in mystery. Records variously say that his father was the sun god Ra, god of the underworld Osiris or even Set. His mother was usually said to be the powerful goddess Nephthys, sister of Isis.

According to pagan website Pagan Magic: "His skin is usually depicted in black because the ancient Egyptians used that colour for afterlife, death and night."

In Egyptian funerary rites, Anubis was the god of embalming and priests often wore Anubis masks to perform the ceremonial mummification process. Anubis was also thought to stand guard at the gates of death, which he would open to allow souls to pass through into the afterlife and would also offer them protection on their journey. 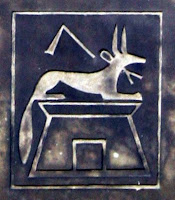 Legend has it that Victorian Egyptologist Joseph Bonomi might have discovered ancient papyri about time travel in Egypt's Valley of the Kings and that he constructed a time machine with inventor Samuel Warner. A depiction of Anubis seated on top of a portal-like structure, which appears on Bonomi's headstone in Brompton Cemetery (pictured left) was cited as evidence for this by writer
Howard Webster.

Whatever the truth of that story, Anubis has certainly opened the gates of the imagination for a variety of creators of fiction, including Tim Powers in his novel The Anubis Gates

and Robert Bloch in his story Opener of the Way

pictured at the top is available through Amazon

The resin statue of Anubis in canine form pictured above right is available from Pagan Magic for £9.99.

Opener of the Way