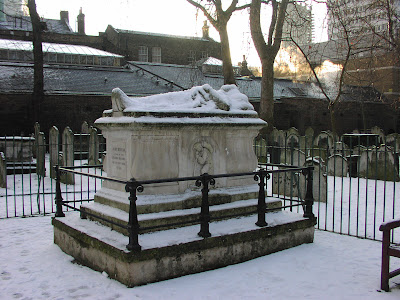 We still seem to be gripped in Narnia-like winter with snow thick on the ground and fresh falls masking slippery ice.

Several times over the past week I've seen news headlines proclaiming "The Coldest Night of the Year". It certainly seems a time when any sensible creature - human or otherwise - would want to be hibernating rather than venturing outside.

Unfortunately, unlike in Narnia, Christmas has been and gone but winter is still here and the summons back to work can't be avoided if one wants to earn enough to pay the bills and eat.

One lunch hour last week I went for a wintry stroll around London's Bunhill Fields Burial Grounds. Part of the ancient graveyard is a public park and the lane running through it is often used by pedestrians as a shortcut so it is usually a busy place, but on that day it was almost deserted.

I found myself wandering alone among the silent tombs with only a hopeful squirrel, a few pigeons with their feathers puffed up against the cold and a solitary sorrowful magpie for company.

On my iPod, while standing on freezing station platforms waiting for delayed trains home, I've been listening to The Coldest Night [The Crow & the Salmon] from Rigantona's Daughters by Scott Jasper and Susan Garlick:

"Has there ever been a night as cold as this?
Has the land ever been so frozen deep in winter's grip?
If so, it must have been far and long ago,
I call to seek the answer from one who might know..."

The song is about the coldest night in history, far colder than our winters these days and only recalled in legend or perhaps in ancestral memory of the oldest animals of our lands.

In Irish and Welsh tales, the crow and the salmon are mythological creatures of cunning and wisdom. The song The Coldest Night describes a battle between them that is both a physical struggle for survival in a land where water is frozen and food is scarce, and a magical contest of wits between the king of water and the queen of air for knowledge that comes from deep within the land.

Well, if I was seeking ancient creatures of wisdom, I was certainly out of luck at Bunhill Fields Burial Ground. There weren't any crows about, although I guess the magpie might be considered their mischievous cousin. Pigeons certainly aren't known for their intelligence and the grey squirrel is a recent American visitor to our shores. I suspect the closest salmon was probably in a tin on a supermarket shelf.

But there was one thing I realised as I watched the magpie, pigeons and squirrel trying to find food and shelter from the cold in the frozen graveyard - wild creatures can do with a bit of help to survive this bitter winter.

So, over the weekend, I didn't entirely hibernate inside my centrally-heated home, I ventured outside with scraps of food and bird seed for any of the birds, squirrels, foxes and other wildlife in my garden. 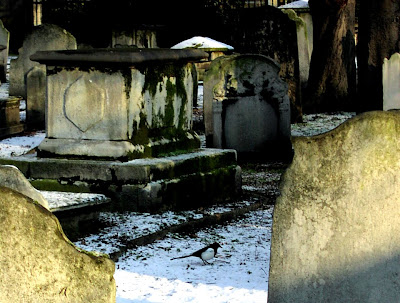 Fantastic photos, BW! Really beautiful. Anyone would think you had new gear ;-)

Thanks very much! Though I actually took the pics with a very old camera - an Olympus Camedia that is abotu 9 years old! It takes lovely photos still, just not very high on the megapixels.