Focus on Vodou (or Voodoo) 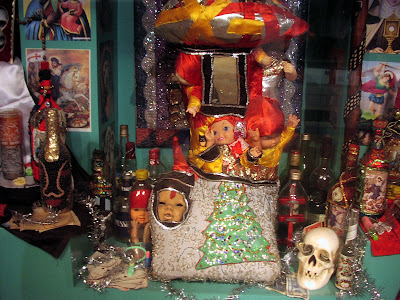 Fancy writing about Voodoo? A pagan friend of mine is in to it and I don't know much about it. Do you?

To be honest, I don't know a great deal about Voodoo, but I'm more than happy to share the little I have learnt.

The word "Voodoo" is an Anglicised term that is often used to refer to the Haitian religion vodou or vaudou. Vodou is a mixture of West African spiritual practices, Catholicism and old Caribbean beliefs. It developed as slaves were brought from African to Haiti in the 16th century. They were forced to convert to Christianity, but retained traditional African perceptions of spirituality as well as taking on a few folk practices from the region.

Today, 80 percent of Haiti's 9 million people are officially Catholic, but many practice voodoo at the same time.

Vodou means “spirit”. Followers of Haitian vodou believe in a supreme god called Bondyè. However, Bondyè keeps aloof from human affairs, but spirits called Lwa or Loa can be asked to intercede with him on behalf of worshippers. They are also called upon for healing, to contact the dead and for protection against curses. 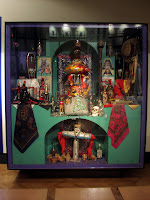 Haitian vodou has some similarities with Louisiana voodoo of New Orleans, Santería and Arará of Cuba, and Candomblé and Umbanda of Brazil, as they all derive from African beliefs.

A Haitian vodou temple is called an ounfo or hounfo, and often contains a decorated altar such as the one in the picture above and right - although that is actually part of a display at the Horniman Museum, in Forest Hill, South East London.

The information panel next to the exhibit has a quote from Pierrot Barra, of Portt-au-Prince, Haiti: “I help the spirit world to ride through my people. Vodou is Haiti and Haiti is Vodou.”

"The Haitian vodou altar is the place where the living and the dead, the human and the divine, meet and communicate.

"Each Haitian altar, or pe, is dedicated to a single or group of spirits (lwa) and contains his or her image and offerings. The altar is a constantly changing centre of vodou life, being added to or taken from as the relationship with the world of the spirits changes in the same way human relationships suffer fracture and renewal."

Haiti, of course, is still suffering the effects of the terrible earthquake that hit the island a month ago. On Friday, Haiti held an official day of mourning over the disaster, at which Roman Catholic, protestant and vodou preachers offered prayers. It seems appropriate to honour the spirituality of many islanders in my blog today.

To donate money to help the people of Haiti, contact the Red Cross, UNICEF or Oxfam.

Books on the subject of voodoo or vodoou, which I admit I have never read but would like to, include Voodoo: Truth and Fantasy (New Horizons)

and Mysteries and Secrets of Voodoo, Santeria, and Obeah

. These are all available through Amazon.

In love and light,

People are getting killed over this nonsense. Maybe it is time to leave the make believe for children and come join us in 21st century.