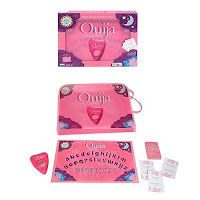 In the US, a pink Ouija board that is being sold through toy retailers, including Toys R Us, is stirring up a few arguments.

The board is produced by Hasbro, which has apparently been making Ouija boards since 1967 and selling them through toy retailers. However, this one is pink and is aimed at teenage girls on sleepover parties.

Ouija boards supposedly attempt to contact spirits to answer questions by spelling them out on the lettered board.

Complaints about this set don't only come from Christians who believe such thing are banned in their faith. Some people believe that while it might be OK for adults to dabble in the occult, children shouldn't be led to believe that such things are a game. Others object to the sexism inherent in producing a special pink set for girls. Many feel that Ouija boards simply don't work and shouldn't be sold to kids because they are misleading.

Some examples of these can be found on Yahoo Answers! Robert argued that the Ouija board, in asking questions of spirits, was necromancy. He said:

"Necromancy is strictly forbidden in the Word of Almighty God (The Tree of Life) and opens doors that allow spiritual baneful animus to enter into to those ignornant of these truths."

"It sounds kind of demeaning to girls. Like they can't play around with a normal Ouija board."

While Burnt To said:

"If people really feel that a board game made by the same people who made Monopoly and Clue is really a gateway to the underworld then they don't have to buy the game."

This certainly wouldn't be the first time game producers have tried to turn occult material into toys. Perhaps the most infamous was the Black Magic Ritual Kit produced by wargame company Avalon Hill in 1974.
What do you think? Is it dangerous to let kids play with magic and the occult, or is it just harmless fun? Is the pink board too sexist? Would you buy one?

The pink Ouija board doesn't seem to be easily available in the UK, although you can order one as an import from the US. In the toy section of Amazon UK you can buy a The Guiding Light Angel Board

Personally I think it is ridiculous and isn't a game. I know this from experiences at a sleepover when i was a young teenager and i would not wish to relive that.. or for anyone else to have to. If parents are buying this for their children.. more fool them. Perhaps their ignorance shall tempt a fate they'd rather not have in their lives?

Being constantly bombarded with the requirement to buy heaps of pink gubbins is going to do girls far more harm than any unclean spirits they might get to traffic with, imo.

I don't think there is anything wrong with adults making a choice decision to buy or use Ouija boards, I have recently ordered traditional board and also have Tarot cards and Rune Stones. But I do not believe children should be playing around with these things, I had many scary incidents using things like these as a child. Children are too young and there minds are not developed enough to be experimenting with these things and should be discouraged for emotional and mental welbeing.

My opinion is one of an open-mind. The fact that the board is pink to me means nothing. Men wear pink shirts and I'm sure if the mood for a pink Ouija board manifested itself they would get it. If a teenager (and I am not referring to adolescents) wanted their parents to buy the board for them, the parents should make sure they understand what the "game" is and the "side-effects" that could occur. Ever individual is different, there are forty year old adults with the maturity level of a five year old.

Can you tell us more about this? I'd care to find out more details.

Excellent article. I am facing many of these issues
as well..

Hi there! This is my 1st comment here so I just wanted to give a quick shout out and say I really
enjoy reading your articles. Can you recommend any other blogs/websites/forums
that cover the same topics? Thanks for your time!

I love looking through an article that can make people think.
Also, thank you for allowing me to comment!