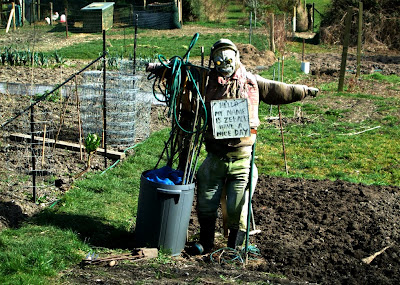 I saw this rather scary-looking scarecrow about this time last year while out on a country walk.

Although scarecrows normally appear in fields and gardens in springtime - built by farmers and gardeners to keep crows from eating newly-planted seeds - as creatures from horror stories they are mainly associated with harvest-time and Samhain (or Halloween).

One possible reason for this is that they look similar to Jack O'Lanterns, which as well as being carved pumpkins are monsters with the bodies of men and pumpkin-lantern heads. They are named after Stingy Jack who, according to Irish legends was cursed by the Devil to wander the Earth for eternity with only a single coal to light his way.

To be honest, I have always wondered whether scarecrows are more effective at scaring off human trespassers than the avian variety. Today, most farmers use reflective strips of plastic that shimmer in sunlight to deter birds and in the past many would simply shoot the offending crows then hang the corpses from a pole or tree as an example to others.

This is probably what Robinson Crusoe meant, in the 1719 novel by Daniel Defoe, when he said: "I could never see a bird near the place as long as my scarecrows hung there." Robinson Crusoe is also the first known English story to use the term, although scarecrows have probably been used to protect fields for thousands of years.

In the US, published tales of animated scarecrows begin with writer Nathaniel Hawthorne's short story Feathertop, published in 1852.

In this, a 17th-century witch from Salem, called Mother Rigby, makes a scarecrow to protect her garden from birds, but then decides to animate it to do her bidding. The creature at first believes he is human and falls in love with a girl from the village. She also falls in love with him, but when she sees his true reflection in a mirror she is horrified.

The scarecrow then realises what he truly is and decides to end his sad, unnatural life. Mother Rigby says: "There are thousands upon thousands of coxcombs and charlatans in the world, made up of just such a jumble of wornout, forgotten, and good-for-nothing trash as he was! Yet they live in fair repute, and never see themselves for what they are."

The story is supposed to be a moral tale, rather than a horror story, yet it has spawned countless tales of terror.

But many of the scarecrows that appear in fiction and folklore, rather than being scary, are helpful or even likeable

In Kojiki, the oldest surviving book in Japan (compiled in the year 712), a scarecrow known as Kuebiko is a god. He cannot walk, but because he stands in the open and watches everything that happens, his knowledge is vast.

Perhaps the most famous friendly scarecrow is the one in L Frank Baum's tale The Wonderful Wizard of Oz. However, rather than being all-knowing, that scarecrow was much in need of brains and that was the reason for his quest for the Wizard of Oz.

Worzel Gummidge is another friendly scarecrow. He was invented by novelist Barbara Euphan Todd in the 1930s, and made popular in an ITV series in 1979.

The Scarecrow was also the name of the disguise used by Robin-hood style rogue Reverend Doctor Christopher Syn in a series of novels written by Russell Thorndike. The first book, Doctor Syn: A Tale of the Romney Marsh, was published in 1915. It was made into movies in 1937 and 1963.

Perhaps the lesson to be learnt from the many tales of helpful scarecrows is not to judge people by their appearance.

Even the fellow in my picture at the top is far more civilised than his fearsome face suggests. He has a name, according to the board around his neck, although it is a little hard to read in the photo. He greets passers-by with a friendly "Hello" and even wishes them a nice day.

And it certainly was a nice day when I took the photo - perfect for a spring walk in the countryside followed by a lovely pub lunch at a place just down the lane from the seed beds guarded by my scarecrow friend.

Many villages in the UK have scarecrow festivals, such as the Wray Village Scarecrow Festival, starting on Saturday 24 April. These usually include competitions for the best or most original scarecrow.

That was fascinating. I didn't realise how interested in scarecrows I was until I read this. I made a scarecrow myself once, female but sadly I didn't give her a name.

Wow! Thanks for that!