The witch's niece and the magical key tree 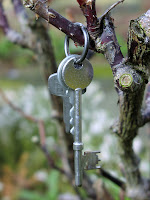 When I was a very young girl, I loved to visit my aunt. All the other children at my school thought I was very strange to even dare go anywhere near her, because they were convinced she was a witch.

Actually, she wasn't my aunt, she was my great aunt. And although I am sure she wasn't a witch, there was very much that was witch-like about her. She walked with a stoop, had a long hooked nose and had a silver streak in her grey hair. She also lived in an old, somewhat run-down cottage with a front garden that was so overgrown with trees it was like walking through a forest to get to her front door.

I think she liked it that way - she preferred to keep her own privacy and she certainly didn't care what other people thought about her.

But if the front of her cottage was a dark and forbidding forest like that in which Hansel and Gretal might have lost their way, the back was like an enchanted garden. From spring to autumn it was a riot of colour, with old-fashioned flowers like honeysuckle, sweet peas, huge roses, phlox, pinks, poppies, wisteria and snapdragons.

My aunt might not have really been a witch, but it seemed she could work magic when it came to making plants grow and flowers bloom. When I visited her, she was usually in her back garden and, in the spring she was often planting seeds, taking cuttings or potting seedlings. She told me that she had "green fingers", meaning that she had the knack to make things grow.

One Saturday morning when I went to visit her, instead of finding her round the back of her home, she was in the dark front garden digging a small hole in the dark earth at the base of a tall pine tree. As I watched, she took a little key out of her pocket, placed it carefully in the hole, and covered it with soil.

"Why are you planting a key?" I asked.
"Why do you think?" she asked in return, with a twinkle in her eye.
"Are you planting a key tree?"
"Would you like a key tree? Key trees are very difficult to grow," she said. She had a wicked sense of humour. "You will have to come back and watch it every day to see if anything sprouts. Then, if it does, come and tell me."

So that was what I did. Every day that spring, and well into the summer, I popped around to my aunt's house on the way to school each morning - and during the day the weekends - to keep an eye on the spot the key tree was to emerge. My mind was full of questions - none of which my aunt would answer. What would the tree look like? How soon would its keys bloom? What doors would they open?

But nothing grew from the dark soil at the base of the tall pine tree in my aunt's gloomy front garden, where the key had been planted. My eager anticipation turned to anxious concern, then to a sense of failure. I just didn't have green fingers like my aunt. I didn't have her magic.

One day in the summer holidays I returned home in such despondence that my mum asked me what the matter was. I told her everything - and, after she stopped laughing, she explained what I am sure you have worked out; my aunt hadn't planted a tree, she had simply been putting her spare front door key in a time-honoured hiding place.

Yes, my aunt certainly did have a wicked sense of humour, but she had also taught me something very valuable - apart from not being so gullible in future. She taught me the importance of imagination.

No key tree grew in the dark soil at the base of the pine tree, but in my mind it grew tall and beautiful, with many leafy branches where gold and silver keys hung ready for picking. And in my mind, those keys opened doors to wonderful places - places only seen in fairytales.


My aunt may not have been a witch but, then again, maybe she was.
Posted by Badwitch at 08:01

Maybe your great aunt really knew there was a secret door underground!! She sounds like she was fascinating.