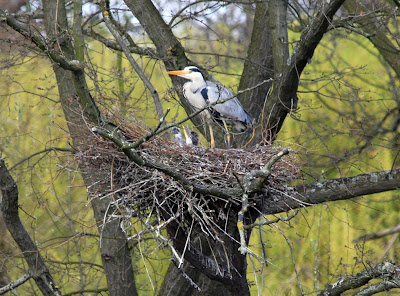 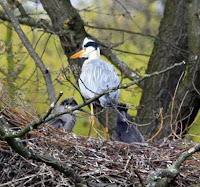 Spring has finally come to London. So, on a warm, sunny day at the weekend I went for a walk in Crystal Palace Park. In a tall tree beside the large lake, I saw a pair of grey herons feeding two chicks. I also managed to take several pictures - three of which I've posted here.

Herons are birds that have symbolism in many cultures around the world. They are often seen as being wise and going with the flow of life as they fly up and down waterways hunting for fish. Sometimes, however, they are also seen as opportunistic thieves who will steal fish that doesn't belong to them.

Although they are water birds, in ancient Egypt herons were associated with Ra, the Sun God. One theory about this is that they nest in high places but swoop down over the water, the sunlight reflecting from their huge wings. 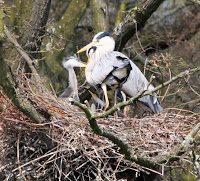 The purple heron is also thought to be a possible origin for legends about the phoenix. I'm not quite sure how herons came to be associated with these mythological fiery creatures that rise from the ashes of their cremation. However, a friend did point out to me that they sometimes nest on top of chimney stacks, where catching fire must be a bit of a risk.

In both African and Greek mythology, herons were often considered to be messengers of the Gods - although the news brought could be good or bad.

Hopefully the news these birds were bringing was the final arrival of spring, heralding a lovely summer ahead.

We saw heron in the small lake at Sunray Gardens the other day. It wasn't such a good omen for the frog it was eating.

Lovely pictures, well done. The chicks remind me of young storks in their high nests, which are beginning to appear all over my region of Portugal.