Working with the Emerald Tablet 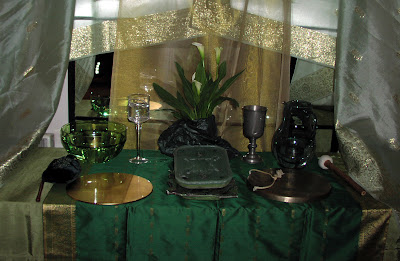 The Emerald Tablet of Hermes Trismegistus is an ancient and mysterious artifact said to contain the secrets of alchemy and magick; and on Saturday, May 8, pagan teachers Vivianne Crowley, Caroline Robertson and Caroline Wise ran a workshop exploring its myths and truths.

It was a superb workshop, on a fascinating subject, and was attended by people from all over Europe, following a wide variety of magickal traditions and all levels of experience.

The words supposedly written on the Emerald Tablet are found in many different texts, and in many languages including Arabic, Greek and Latin, although the whereabouts of the original inscribed stone, if it ever existed, is not known. Over the centuries the various versions have been analysed and retranslated in efforts to understand what they mean. They are valued because they are believed to contain the recipe for alchemical gold and how to raise one's consciousness to a higher level.

Its father is the Sun,
its mother is the Moon,
the Wind carried it in its belly, its nurse is the earth.
The father of all the talismans of the whole world is here.
Its power is whole if it has been turned into earth.
You will separate the earth from the fire,
the subtle from the dense, sweetly, with great skill.

It ascends from earth into heaven and again it descends to the earth,
and receives the power of higher and of lower things.
Thus you will have the Glory of the whole world.
Therefore will all obscurity flee from you.

Of all strength this is true strength, because it will conquer all that is subtle, and penetrate all that is solid.
Thus was the world created.
From this were wonderful adaptations, of which this is the means.

Therefore am I named Thrice-Great Hermes,
having the three parts of the philosophy of the whole world.
It is finished, what I have said about the work of the Sun.

The Emerald Tablet of Hermes Trismegistus with its maxim of "as above so below" is at the core of the worldview of the Western magickal tradition. In the mysteries of Britain and Brittany, it is also closely associated with the Grail. According to one legend, Lucifer, before his fall from Heaven, wore a crown adorned with a huge emerald. As he toppled, so did his crown. The emerald fell to Earth and broke into two pieces. One half became the Emerald Tablet, the other became the Holy Grail.

The Emerald Tablet workshop offered an opportunity to share ideas and explore through talks, meditation and ritual, the myth and meaning of the Emerald Tablet for our own magickal practice and our everyday lives.

I think everyone who attended not only enjoyed the day, but felt they had gained a lot from it - in terms of knowledge, experience and the forming of new friendships.

The Emerald Tablet workshop followed on from the Phoenix Rising workshop run by Vivianne Crowley, Caroline Robertson and Caroline Wise last May.

The photograph above shows an altar at the workshop, with a replica of the Emerald Tablet

Hi--hope you're doing well! I've read some about the tablets, and what I've seen was a little scary in that it reminded me of the more oppressive parts of the Bible. But then I can't tell you which interpretation I read or anything more. I did find them difficult to read and understand, and I don't know that I really learned anything of importance. Did you find these tablets "helpful" at all? To me, seems mostly hype.

I've only read a few translations into English (I can't read Latin), but I agree that they can sound similar to the language in the Bible, which can sound a bit scary I suppose. I've mainly seen them interpeted as coded instructions for alchemy to make the philosopher's stone, such as in the book The Alchemist by Paulo Coelho, which I really enjoyed.

I found the workshop helpful, but that is the only time I have ever worked personally with the Emerald Tablet.