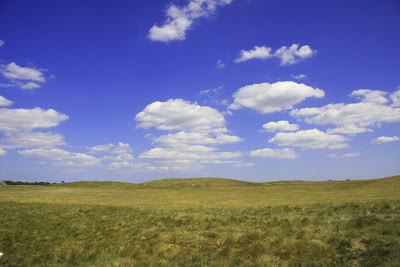 Sutton Hoo, the site of a pagan ship burial, is where one of Britain's greatest treasure hoards was discovered, by archaeologists in 1939. The British Museum lists the Sutton Hoo ship burial as one of the top ten British treasures.

It is thought to have been the tomb of Saxon King Raedwald who ruled East Anglia in the 7th century. He died in AD625, at a time when Christians and pagans lived side by side in England, but he chose to be buried in the style of his ancestors, honouring the pagan gods of the land. He was one of the last pagan kings in England, although his rule ended before Penda of Mercia, the last pagan Anglo-Saxon king, who died in 655, and the last pagan Jutish king, Arwald of the Isle of Wight, who was killed in 686.

King Raedwald's body was laid out in a ship surrounded by fabulous goods reflecting his status, wealth and power. The most impressive item is the famous helmet, which is now in the British Museum, although the wonderful replica (pictured right) is on show in the exhibition hall at Sutton Hoo.

I recently visited Sutton Hoo for the first time, and I was really impressed. Before I went, friends had told me all I would see were a few mounds, because the treasure had all been removed to London, where you can see it in the British Museum. Well, even if that was true, Sutton Hoo was still worth a visit because it is a glorious site that looks absolutely lovely on a summer's day - as you can see from the pictures top and bottom. There are lovely country walks around the burial mounds and through the surrounding woods, with fields nearby and the river in the distance.

Sutton Hoo is managed by the National Trust, which puts on guided tours and events throughout the year including lectures, Anglo-Saxon living history demonstrations, rambles and feasts. Every summer a few original items are returned to the site, placed safely in a treasury room.

If you fancy taking part in a special Summer Solstice Celebration at Sutton Hoo, on Sunday 20 June, Dr Sam Newton will be giving a presentation followed by supper and a sunset tour of the burial mounds. Should be a lovely way to celebrate midsummer. It runs from 7pm - 10pm. The cost is £28 and prebooking is essential. Email suttonhoo@nationaltrust.org.uk or call 01394 389700.

For more details of the site and events taking place, visit http://www.nationaltrust.org.uk/main/w-vh/w-visits/w-findaplace/w-suttonhoo.htm A National Trust Guidebook to Sutton Hoo 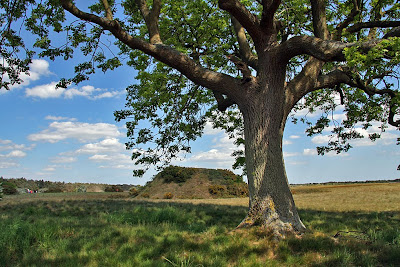 The photographs of Sutton Hoo on this page were all taken by myself, The Bad Witch, with permission

And it's a few days off of my birthday so I could probably treat myself.