The Bad Witch goes looking for wing of bat... 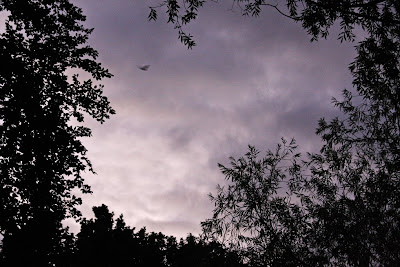 ...Or perhaps that title should have been "The Bad Witch goes looking for bats on the wing".

I wasn't seeking out a grisly ingredient for some foul potion, like Shakespeare's three witches in the play Macbeth, I went on a bat walk to watch these strange little mammals come out at night and fly about in the skies above Crystal Palace Park, in south London.

And, in fact, it would be illegal - not to say highly unethical - to attempt to catch a bat, as these days the creatures are endangered and protected by law.

The bat walk was run by The Bat Conservation Trust, a charity that wants to conserve bats and help people appreciate them as part of the natural environment.

We met at Crystal Palace Park's information centre at dusk, just as the gates were being closed to the general public. This was because bats only come out as it starts to get dark. They avoid bright lights and use echolocation to hunt for food, which is usually small insects.

The sounds bats make for echolocation are extremely high pitched and at too high a frequency for human adults to hear, so we were equipped with bat detectors - electronic devices that make the bats' squeaks and smacking sounds audible to those trying to find them.

Then we set off, walking around Crystal Palace Park's beautiful main lake as night fell.

Very soon we started to hear the sounds of bats on our bat detectors - and then we saw them, darting very quickly overhead and swooping across the lake.

The main bats in the UK are Daubenton's bats, which skim the surface of water to catch insects that hover there; noctules, which are about the size of a starling and fly overhead; pipistrelles, which are the bats people are most likely to see as they twist and turn in the air around buildings and trees; and brown long-eared bats, which fly more slowly and stay close to trees.

There was something almost otherworldly about being in the park after dark, encountering creatures rarely seen and listening to sounds that would normally be inaudible.

I tried to photograph the bats, but it is very difficult to get pictures of small, fast-moving animals in very low light. I managed to take the photo above before it got too dark, but even that is quite blurry. My recommendation would be to go on a bat walk yourself to really appreciate these lovely and elusive creatures.

The species of bats that live in the UK are harmless to humans and rarely damage property. However, if you do have bats in your belfry - or your attic, or anywhere else you would rather not have them - please don't try to do anything to them yourself. Instead, contact the Bat Conservation Trust on 0845 1300 228 to move them safely.

To find out more about how you can help conserve bats, go on a bat walk, or donate money, visit the charity website at http://www.bats.org.uk/
Posted by Badwitch at 08:01