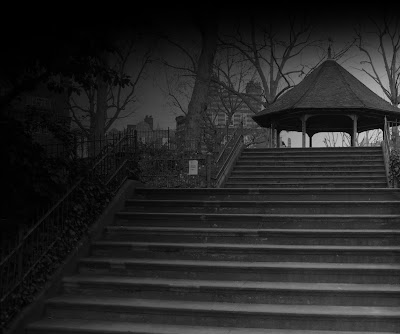 Last Wednesday I went to see Align, a live show on London history, myth and psychogeography, at the Museum of London.

The museum gave it the subtitle of Ley Lines in the Limelight. It was essentially a theatrical talk and artistic slideshow presentation about London's ley lines and psychogeography.

As most readers of A Bad Witch's Blog will know, ley lines are straight lines that run through prominent points in the landscape. One theory about why ley lines exist is that they follow prehistoric tracks, often leading through sites of spiritual or cultural significance such as wells, megaliths, mounds and temples. Some people also believe that earth energy is channeled along ley lines, empowering - or powered by - the holy sites along the way.

Psychogeography is the theory that the landscape and geography of a place affect the psychology of those who live or work there so that similar types of activity tend to reoccur in the same place throughout history. 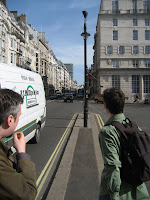 In Align, psychogeographers Robert Kingham and Richard Cochrane (pictured right) explore the secret landscape, history and myths of London. They concentrate on places and events that have happened along the Strand Ley, which runs through St Martin-in-the-Fields, St Mary-le-Strand, St Clement Danes, St Dunstan's in Fleet St and Arnold Circus (pictured above), which was once the site of a friary and later became a notorious area of poverty.

Of course, much of the history of these sites is well documented in regular guide books - and even their secret history has been written about in books such as Christopher Street's Earthstars,

But if you think you are an expert on London's past, Align might still open your eyes to a few things you didn't know, as Robert Kingham and Richard Cochrane have done a wonderful job of unearthing strange and fascinating facts about England's capital.

I personally learnt two things about the area where I worked in for three years, near Old Street, in East London.

The first thing was that The Tower Theatre Company, while excavating the foundations for a new theatre, found they were building directly on the site of London's first ever purpose-built theatre.

The second thing I learnt was that the office I worked in, in Scrutton Street, was next to a vinegar yard owned by the family that later had the dubious claim to fame of discovering and mining blue asbestos. Blue asbestos was found to cause asbestosis and is a substance that has killed many people who came into contact with it. Scrutton Street is also the possible former location of an ancient mound said to have been the site of plague burials.

Those types of synchronicity are points of similarity on the time-line of places that can be compared to points of interest on geographical lines that are called leys. That seems to me to be the comparison that Align tries to make between ley lines and psychogeography.

Of course, I can't help realising that, by that theory, my working in that area of East London makes me a prime candidate to become either an aspiring thespian or a mass killer. I don't think I've killed anyone yet...

You can find out more about Align and watch a six-minute trailer for it at http://bigi.org.uk/align/. Robert Kingham and Richard Cochrane are planning future dates for Align, possibly at the Museum of London or at universities, so check their website for updates.