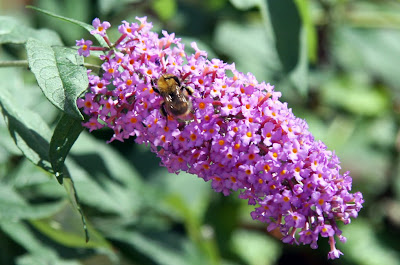 Buddleia - a tall plant with bright blooms that often grow on waste ground - has a special significance to me.

Many years ago, when I was quite new to paganism and had recently joined the Pagan Federation, I decided to go along to an open ritual. I hadn't been to many open rituals before and I was a bit unsure what to do, but the description said to bring along some flowers as an offering so I spent some time deciding what flowers to take.

Shop-bought flowers just didn't seem appropriate. Local wildflowers seemed a better choice, but I knew one should only pick flowers that aren't in any way endangered.

Growing in the car park behind the office I worked in was a huge plant with many tall stems and big purple flowers. I had no idea what it was, but seeing as there was so much of it - it was bursting through a crack in the concrete in vast quantities - I was pretty sure it couldn't be that rare. So I picked some.

Actually, that wasn't the first time I had noticed the plant. I noticed it often.

Although I didn't park a car in the car park - I couldn't afford to run a car - I used to chain my bicycle up there. On sunny days I also used to go and sit on a low wall in the car park during my coffee break. That huge purple plant was the one bright, wild and joyful thing in the entire dismal place.

It wasn't just the car park that was dismal; the place I worked was pretty dismal too - and my job. The work was dull and I was underpaid, undervalued and under appreciated. I was desperate to get out, but it was a time of recession and good jobs were few and far between. I needed the pittance I was earning to pay my bills, so I couldn't just tell my boss to get stuffed, even though I dreamed of doing so daily.

That plant inspired me and gave me hope. It didn't really look that strong, but it was driving a huge crack through the ground of the car park. It was breaking free, just like I would - one day.

So, I picked a bit and took it to the open ritual.

As I was putting it on the altar, someone who seemed to be a very knowledgeable witch said delightedly: "Oh, you have brought some buddleia! That's very appropriate - it is called the bombsite plant because it was the first plant to grow where bombs fell in London during the Blitz. It grows through cracks in concrete and brickwork and is great at breaking up old rubble. It attracts bees and butterflies too."

So, I learnt my plant was called buddleia - and how useful it was.

To many gardeners, buddleia is a weed - something that grows where it wants to, destroying property and hard to get rid of once it has taken root. But to me, buddleia is part of mother nature's secret army, breaking down barriers and giving hope of freedom.

Even though I have a much better job now, I still love to see buddleia growing in the city - particularly in unsightly car parks!

The photos show some buddleia growing on an industrial estate in south London (not anywhere I have ever worked, I should add). 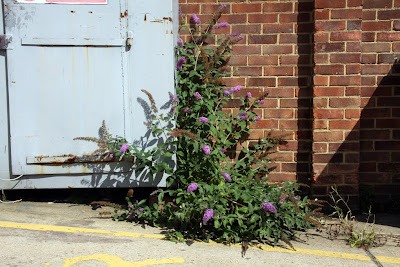 ^-^
I love this story of yours. Like the flowers in mention, it gives me hope. I glad that in that dismal time you had at least one bright & lovely thing to look forward to. Thanks for sharing this! ^-^

I will treasure the one in our garden even more after reading this! It's a sprawly, ungraceful thing but I love it anyway.

We had a giant Buddleia bush in the front garden of my childhood home, which we nicknamed "the butterfly bush". Seeing it in riotous bloom anywhere always brings back memories of sunny days sat outside watching the butterflies and bees.

I planted a varigated one in a tub in my tiny patch. It has lovely gold edges to the leaves, and the flowers are a deep lilac colour. Yesterday it was smothered with "Red Admirals" and "Peacock" butterflys, not to mention bees and hoverflys. I love the analogy of the "breaking through" pushing new life up through the hard stuff. I think many of us will resonate with that!

Great Post, Buddlea for Bees is Perfect,
thought you might enjoy my machinima film about bees and permaculture
http://www.youtube.com/watch?v=CsVL22dIdKw
Bright Blessings
elf ~