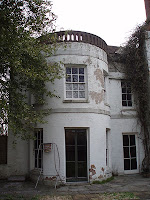 Do you fancy living in an old haunted house? If you do, then you might want to put a bid on Wymering Manor, in Portsmouth, which is going to be auctioned on 21 September.

Wymering Manor, a Grade II* listed building in a conservation area, is not only the oldest building in Portsmouth, it is also the most haunted. Visitors claim to have heard children whispering, seen strange apparitions and even experienced poltergeist activity.

Although most of the current building is 16th century, parts contain Roman and medieval materials and the cellars are said to be Saxon in origin. The building is currently owned by Portsmouth City Council, which has run it as a youth hostel and has also been used by paranormal groups to run ghost tours.

Estate agency website rightmove.co.uk lists it as having 10 bedrooms, four reception rooms, a kitchen, a grand entrance hall and a chapel. If you are interested in buying the manor, you can get further details and an auction catalogue via www.a-r.co.uk or by calling 020 7703 4401.

It would be so cool to live there!