A Day for Gerald 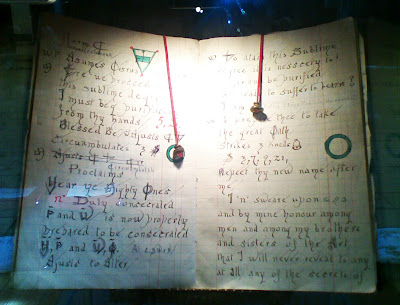 Yesterday I went to the Charge of the Goddess Conference 2010 - celebrating the life and work of Gerald Brosseau Gardner (1884-1964). The conference was at Conway Hall, in London.

It was a wonderful event and I'm going to do a full write-up of it some time over the next week. In the meantime I thought I would post a photo of Gerald Gardner's Book of Shadows, which was on display there.

I think this is his early Book of Shadows, which is in the Doreen Valiente collection. This is held by the Centre for Pagan Studies, which aims to put the items belonging to Doreen and Gerald in a museum where anyone who wants to can go to see them.
Posted by Badwitch at 10:54

Being a solitery Witch I dont get to meet many of my kind (There are not alot of Wiccans or Witches in my neck ofthe woods). Being able to see someone elses BoS is fantastic, let alone Gerald Gardners book.

Looking forward to the full right up of your weekend.

Thank you so much for posting this picture of pages in Gerald Gardner's BOS.. I find this exciting to see it. I am enjoying your blog so much.
Sobeit

I was really pleased to see Gerald Gardner's BOS too! Thanks for the kind words about my blog :)

Wow thanks for the blog post. That BOS looks more smarter than mine lol. Mines like bits and bats cut and stuck in everywhere and my scruffy (in comparison) hand writing. But it is in a nice leather bound book with hand made paper, pentacle on the front and my initials all of which hand made that I got off ebay. Mine will always be a kind-of-a-work in progress and probably always will be.

I look forward to reading the further blog post on how the event went.

I am currently reading The Meaning of Witchcraft. How very awesome, it must have been to look at Gerald Gardner's Book of Shadows!