Quantum Tarot 2.0 - the tarot of physics 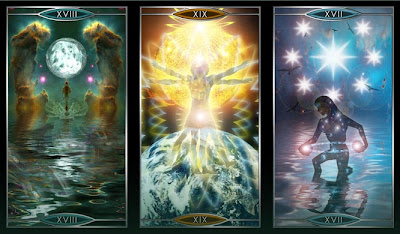 I've just been sent details of a gorgeous new tarot deck called Quantum Tarot 2.0 - a Tarot of the New Physics. It was created by Kay Stopforth, who co-runs The London Tarot Salon, and artist Chris Butler.

According to the blurb, Quantum Tarot 2.0 is all about physics and "combines the revolutionary theories of 20th and 21st century physics with traditional tarot wisdom. Using vivid photographic imagery from the Hubble Space Telescope and NASA missions, these cards are unique digital works of art designed to illuminate the fascinating and complex world of modern science - everything from quantum mechanics to superstring theory, from the big bang to black holes."

Physics was never really my thing in school - mostly because the physics teacher could have given Professor Snape a run for his money in terms of her downright scariness, her ability to spot mischief-making and the unpleasant punishments she meted out. When she caught me wearing black nail polish to school one day (something that was strictly banned), she mixed up nail polish remover in the chemistry lab that turned my nails bright yellow for weeks.

However, I think this tarot deck could just be the thing to rekindle my interest in science.

is a new edition of the Quantum Tarot,

is out later this month and is available to pre-order from Amazon.

I'm torn - I'm allergic to anything that links quantum physics with the new age, but on the other hand this is the most gorgeous tarot deck I've seen for a long while.