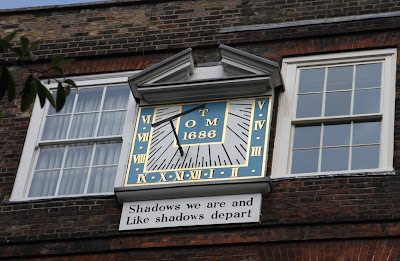 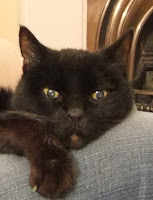 A friend's cat died last week. His name was Shadow. He was black and sleek and would often sit like a statue of Bast and look at you as though he knew some secret he wasn't telling. He was the perfect witch's cat.

However, Shadow was not a young cat and had been ill for some time. Despite the best care - both medical and magical - he passed away.

When I was walking through Pump Court, past Temple Church in London's Middle Temple, I noticed the sundial high on a wall that bears the motto: "Shadows we are and like shadows we depart". The words stuck in my head and began to turn themselves into a poem - a eulogy for Shadow, the witch's cat:

Eulogy for a Witch’s Cat

Shadows we are
And like shadows we depart;
Humans and beasts alike;
Companions on life’s journey
Until death takes us on separate ways.
Night falls
Shadows fade to darkness;
But, in time, dawn will come
And early morning sunbeams,
Dancing like kittens ,
Will chase away the shadows of grief.
Life goes on
And memories remain.

Lovely Poem, fine words, he must have been a wonderful soul to have inspired you so much.