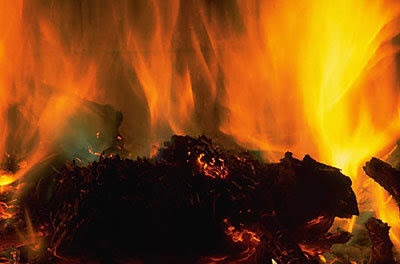 I love a bonfire - especially on November 5, which is Bonfire Night.

It brings back so many happy memories of childhood; of spending the weeks before November 5 collecting wood and other stuff to burn and making a Guy to go on the top out of old clothes stitched together and stuffed with newspaper. The Guy's head - in the days before you could buy easily buy plastic masks in the shops - was usually made out of papier-mache, painted with gruesome features and topped with some unwanted hat.

The Guy was crude and basic, but also fun and individual.

Traditionally, of course, the Guy was meant to represent Guy Fawkes.

Bonfire Night, otherwise known as Guy Fawkes Night, celebrates the foiling of a terrorist attack, known as The Gunpowder Plot, to blow up the Houses of Parliament on November 5, 1605. Guy Fawkes, a mercenary hired by Catholic conspirators to handle the explosives, was discovered and executed along with his fellow plotters. Burning the image of a man with a moustache and a tall hat to represent Guy on November 5 became the custom.

But my childhood friends were more likely to make a guy of some a much-hated teacher from school than something looking like Guy Fawkes. And we would joyfully watch our effigy go up in flames on November 5 while singing the traditional Bonfire Night song:

Build a bonfire, build a bonfire
Put the teachers on the top
Put the schoolbooks in the middle
And burn the blooming lot!

As I got older, hated teachers were replaced with unpopular politicians, destined for the top of the pyre. When I was in the sixth form we made a rather realistic model of then Tory Prime Minister Maggie Thatcher in our art class to put on the bonfire, which we were very proud of. Unfortunately, the caretaker's dog savaged her beyond repair before November 5 and we had to make a quick replacement.

I was never quite sure whether the caretaker's dog was red under the collar, or whether some Tory supporter put the mutt up to it to save Maggie from public immolation.

These days, however, I don't think I would make a Guy in the image of any real, living person. It seems just a little bit too much like black magic.

On the other hand, maybe I'm taking this magic thing just a bit too seriously - burning an effigy as a political or social statement is a time-honoured custom, just like November 5, and it can definitely be cathartic to have some harmless rebellious fun.

I am so excited that it's finally cold enough for real bonfires. Now I can finally getting around to working that "getting shit out of my life" spell with some pizazz ;)