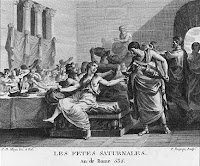 Today, 17 December, is Saturnalia - an ancient Roman festival celebrated in much the same way as we celebrate Christmas today. It was a time for feasting, drinking and merriment. People would exchange presents, have private parties at home and everyone got time off - even slaves.

The idea of the Lord of Misrule is thought to originate in Saturnalia, as part of the day's fun and frolics involved the slaves having a banquet at which their masters served them food and they could boss their masters around for once.

It was such a popular holiday that over the years it expanded to a whole week, up to 23 December.

So, Happy Saturnalia! although Romans would have said "io, Saturnalia!", meaning "Ho, praise to Saturn".