Meteor showers and the cosmic joy-rider 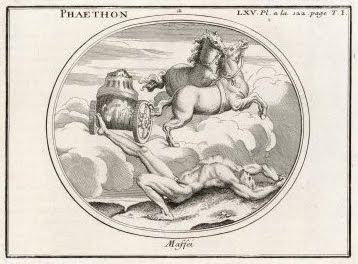 This was sent to me by Dave Molz of Cosmic Devices:

Geminid Meteor Shower on the Night of the 13th-14th December

Renowned for bright and colourful fireballs this will probably be this year's best meteor shower. The peak is just after sunrise on the 14th, but there will be shooting stars all night of the 13th. The later at night you can go out and see them the better the meteors will appear to radiate from the constellation Gemini.

The meteor shower is a bit of an enigma as explained here:

I've always had a soft spot for Phaethon - and only previously knew of his story because it was at his death that his best friend cried himself into a swan to become the great constellation Cygnus (the Northern Cross) and now I find out he's also related to this meteor shower.

Phaethon was the joy-riding demigod and the epithet on his tomb read:

"Here Phaëthon lies who drove the Sun-god's car.
Greatly he failed, but greatly he dared."

Basically, he stole the keys to Helios' chariot and while he tried to drive the Sun along its usual path across the sky it was a bit like a parrot riding a motorbike and it all went totally out of control.

Poseidon moaned as the seas froze then boiled, whole cities and civilisations were destroyed, Gaia complained of being scorched as the deserts of Africa were created.

With the danger of Earth being laid to waste and the heavens frazzled, Zeus let fly a cosmic stinger and struck Phaethon with a lightning bolt and he then crashed and burned into a river.

Phaethon was also associated as the Babylonian Morning Star or Lucifer (meaning The Light Bringer - as the Morning Star burned in the sky when all the other stars had gone and heralded the Sun rising).

I'll be out tonight with camera in hand (actually on a tripod) to photograph yet another meteor shower. Should the results prove goos, I'll send you a copy.