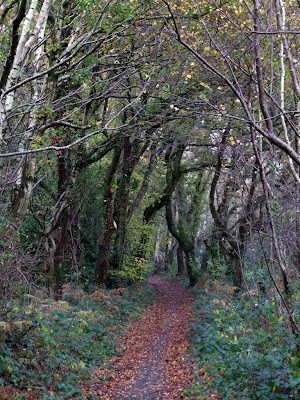 This picture was taken by Failing_Angel and shows the path through Chewton Common woods, in Highcliffe, Dorset. It is a path where Gerald Gardner, the founder of modern Wicca, must often have walked.

At The Charge of the Goddess Conference this summer, Philip Heselton, an expert on Gerald Gardner, gave a talk called The Life of Gerald Gardner. In it, Philip said that when Gerald was in his fifties, he moved to a village near the New Forest where he met occult and spiritual groups via a Rosicrucian theatre and underwent an initiation into what he described as a surviving witch cult, the members of which were called “the Wica”. That village was Highcliffe.

This autumn, Failing_Angel and myself decided to visit Highcliffe and, while we were there, we took some photos, including the one above.

and Wiccan Roots: Gerald Gardner and the Modern Witchcraft Revival

. His latest book, Witchfather, which is due out soon, formed the basis of the talk he gave at The Charge of the Goddess Conference. If you want to know more about Gerald, I can strongly recommend reading any of Philip's books.