Controversy over witches of Hopwas Wood 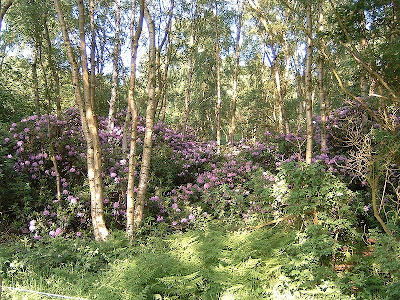 Over the past month, newspaper and website This is Tamworth has run a series of articles about alleged intrigue, witchcraft and occult activity in Hopwas Woods, Staffordshire. The features have not been particularly pagan friendly - and the latest one is, frankly, a sensationalist rehashing of some very old news.

The first couple of news articles were about supposedly occult artefacts that were discovered in the woodlands, including an Egyptian-style statuette and an engraved copper tablet. Local residents were keen to find out why they were there and what they meant. Those stories were not too offensive, and I even blogged about the first one, back in December. I guess a little curiosity is natural, and one shouldn't leave stuff lying around in public places - particularly when it might have magical significance.

This is Tamworth's latest story is far more sensationalist. It states: "Hopwas Woods has been the centre of tales of naked witches, occult artefact discoveries and spooky goings-on for decades."

Then it dug an old copper out of retirement to tell a tale about an incident in 1984 when he was called to investigate a report of naked witches dancing in the woods.

This is Tamworth reports the ex-policeman as saying: "It was quite an eerie experience, believe me! There were signs of a burnt out fire, and a number of small bones, which, at the time, were thought to have possibly been sacrificial and later identified as bird bones, possibly chicken bones. There were also signs of a roughly drawn out pentagram scratched on the ground nearby. A number of items were taken for later forensic examination if required."

A group of people were arrested, thrown into police cells overnight and interrogated. Extra police were drafted in to guard the woods. The only charges made, however, related to a bit of cannabis possessed by a few members of the group - hardly the crime of the century in my opinion. Was it really worth all that police time and effort, even that long ago?

The group also denied being witches, instead claiming to be members of an occult group called The Order of the Silver Star. It makes sense to me that they weren't witches. Witches, in my experience, are generally far more circumspect about their outdoor rituals than that bunch seemed to be.

Witchcraft was not illegal in the 1980s, but now paganism and witchcraft are far more acceptable in the public eye than they were back then. These days the police are taught to treat pagan rituals with sensitivity and understanding.

So, This is Tamworth, please take your Gene Hunt lookalike back to his retirement home and ask some modern policemen if they would throw people into prison for being pagans.

And, so long as people using Hopwas Woods aren't breaking the law, causing a nuisance or damaging the environment, I don't really care if they are fluffy Wiccans celebrating the solstice, wannabe Cthulhu cultists attempting to summon That Which Does Not Exist from beyond the void - or the local Girl Guides having a chicken barbecue and singing late night songs around the campfire.

In this country people of all beliefs are perfectly entitled to enjoy our lovely public woodlands - and if they want to dance, sing and say words in honour of ancient gods, stars or planets, that is their choice.

But, fellow pagans, when you are outside celebrating the seasons, do make sure you take your ritual artefacts - and your litter - home with you afterwards. If you don't, you could find some Scooby gang trying to investigate what you've been doing and selling their story to This is Tamworth.

I hope we see more responsible journalistic reporting in Tamworth in future.

I live in Tamworth and walk in the woods with a dog i am also a Pagan and on asking others we know of nothing going on .

When i was younger there were stories of strange goings on but nothing that made are parents stop us playing there or my children either ......ifact the dog and i were up there last week and the only things weird where the pigs in the fields next to the woods

but then most are 'weekend pagans' of course. Wiccans and druids that don't realise all their rites don't date back further than Gardner, Crowley et al.

It was occultists practising in Hopwas Woods by the way - not necessarily pagan, there are such things as Christian occultists, though the A.A. isn't really Christian. The plate was left there before A.C. went to Hastings, he left numerous plates like this around England.

A.C. left the plate there after going to Hastings. He left several around the country.

most pagans are druids and wiccans and don't realise that the authenticity of their rites go no further back than Crowley and Gardner. before that there is no historical records of the rites of druids - bar Roman propaganda and witch hunters of course.

I was an instructor at the barracks. I had heard this story at the time but thought it was probably made up. Anyway, one day we had a platoon out on a run through the woods and I cut across to intercept them with another instructor. Coming through the woods o the west side, we came to a clearing. There was a burned out fire there, with a ring around it where people had been walking. There was also a crude upturned cross stuck in the ground larger than a man. What I remember about the woods is that there were hallucigenic mushrooms growing all over in autumn.

Seeing this burnt out fire and tell tale circle was the second time in my life. When I was 15, in my last year at school, we had heard about a tale of similar people doing witchcraft in some woodland about 3 miles from my home. So me and 3 other boys skipped a day off school and went looking for traces. We took some air pistols and spent most off the morning shoooting up trees without seeing anything. Most of the time we were running down clearings. Anyway we started heading home, a little bit dissapointed at seeing nothing. We took a narrow footpath up the side of the wood where upon we came to a clearing. Much smaller than hopwas woods but there was also a burnt out fire and a ring around the fire where people have been walking. No upturned cross, but hanging from a tree over the fire, was the remains of a burnt cat.
IT has puzzled me all these years. Maybe someone can tell me two things. One, why people walk round a fire and two why did this poor cat get burned. Is this a common thing or just some sick individuals high on drugs.

Nic - I would say the cat was burnt by sick individuals high on drugs. None of the genuine pagans I know would be cruel to animals. Wiccans follow a rede (policy) that says "harm none", and many are vegetarians, so would not hurt a cat.

With regard to the poor cat. I'm disgusted that anyone would hurt an innocent creature.
Pagans in general are against anything of the sort and would cause an uproar on witnessing it.

I was present at this ritual in 1984. We were neither Wiccan nor an offshoot of Crowley's A.'.A.'. Although we were known as the O.'.A.'.A.'. we had nothing to do with Crowley, Grant, or other Thelemic organisations. The Enochian Tablet was ours. The crosses, burnt cats, tree-carving, etc, were not. We never did another ritual in those woods. The story is dealt with in a book to be published in June 2018 by Hadean Press, entitled "All this and a Book".

This is a topic which is near to my heart... Thank you!
Where are your contact details though?