Pagan Eye: Swan on a pond 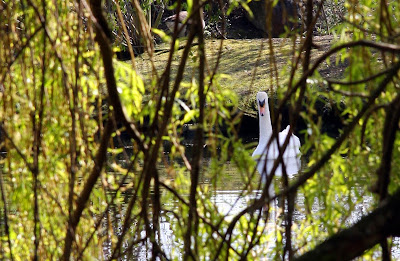 I took this photo of a swan seen through willow branches at Crystal Palace Park a couple of years ago on a lovely spring day.

For ages I thought I'd lost the picture when my old computer died, so I was over the moon when found it again by chance on a back-up drive the other day.

Swans are among the loveliest birds, with their white feathers and the graceful way the seem to glide across the water. Yet their strength defies their slender appearance and they have the reputation of being fierce defenders of their territory.

According to The Signs and Symbols Bible, the swan was a symbol of protection in ancient Celtic countries and its form was often used in jewellery. Swans are also seen as a symbol of true love, because they mate for life.

Hans Christian Anderson's fairy story The Ugly Duckling tells of a chick that believes it is unattractive eventually shedding its grey feathers and transforming into a beautiful adult swan - and for this reason many people see the swan as representing transformation and achieving one's potential.

A swan is the front cover picture for Birds Divine Messengers by Andrea Wansbury, which I reviewed a few days ago. According to the book, the swan's archetype is the alchemist, the master of transformation. It says: "When a swan appears look to see what changes you can make in order to create a wonderful transformation in your life. What negative beliefs can you convert into positive ones? What fears can you use to motivate you into action rather than letting them depress you? Mastering fears and negative beliefs can produce marvelous, life-altering changes."

Perhaps rediscovering my picture of this beautiful swan is sign that things are about to change for the better in other areas of my life too - that would be nice!