Bees and History: A Taste of Honey... 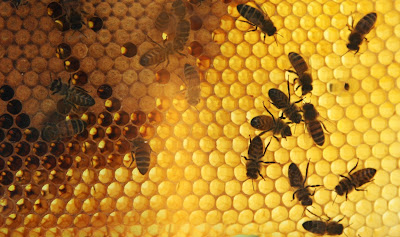 I took this photo of bees on a honeycomb back in the summer of 2009 at an open day of the Kent Bee-Keepers' Association.

One of the bee-keepers had a frame of honeycomb in a glass case, in which you could see the bees busily working. He kindly took it into the sunshine for me to photograph. I promised I would write about his bees - and then I didn't - until now. Oops.

Actually, I did start to write about bees and honey. I began to research the history of bee-keeping and look into the folklore associated with it. I found it was such a huge subject that I felt overwhelmed with the task of trying to summarise it in a single blog post. I made a start, but didn't get very far and it remained as an unfinished draft.

The other day, while I was looking through my old files, I came across the picture I'd taken and the research I'd started and decided that I should publish it on my blog as a short introduction to the subject - a little taste of honey rather than the whole jar!

The history of honey goes back a very long way. Archaeologists have found evidence that humans were eating honey in paleolithic times, and were probably doing so much earlier. Ancient man discovered that it was healthy and could also be made into alcohol - in fact fermented honey was probably the very first alcoholic drink.

According to The Sacred Bee in Ancient Times and Folklore

by Hilda M Ransome, bees have been considered sacred ever since man discovered honey. The book says: "It is impossible to overestimate their value to man... He came to regard honey as a true 'giver of life'... He held the bee to be a creature of special sanctity connected with those things which seem to him most mysterious - birth, death, and reincarnation."

Folktales and customs relating to the importance of bees have arisen in cultures all over the world, including the belief that one should always tell the bees about important events, otherwise something could go wrong.

The bee was the symbol of Lower Egypt for thousands of years, and the Bible describes Egypt as a land "flowing with milk and honey". Honey production was an important industry in ancient Egypt. As well as being a popular food, physicians and magicians used honey for its healing properties.

Honey was important in funerary rites and sometimes the dead were preserved just in honey. One story tells of grave-robbers finding a large jar of honey in a tomb near the pyramids. They opened it and started eating, before noticing that the jar also contained the body of an infant.

Priests baked honeycakes to feed sacred animals in temples in Egypt and Greece. Sorcerers of the era also used beeswax to make images of creatures or people in order to perform magic on them.

The belief that a magician can heal or harm a living person by manipulating a wax image of them was common in Babylonia and India as well as Egypt. The practise passed from Egypt to ancient Greece and Rome and was used in many religious ceremonies. Witches today still sometimes use wax dolls, called "poppets", for sympathetic magic.

In Babylonia, offerings of wine, honey and oil were poured on temple foundations, honey was also a common offering in religious ceremonies and as part of rituals to exorcise demons.


Today, honey might be used less for religious purposes, but toast with butter and honey, and a cup of tea, is still the breakfast of the gods in my opinion. There are 44,000 bee-keepers in the UK, with about 240,000 hives. Although they produce 6,000 tones of honey per year, about 80% more than this is imported from abroad.

You can find out more about the Kent Bee-Keepers' Association, including details of events taking place this summer, at http://www.kentbee.com/